The 2018 NBA preseason is underway, and per their annual tradition, the NBA will be holding two exhibition games in China this month. The 2018 NBA China Games will feature back to back matchups between the Philadelphia 76ers and Dallas Mavericks in Shanghai (October 5) and Shenzhen (October 8). Like every year, these games provide an amazing opportunity for NBA to feed their growing popularity among Chinese fans. 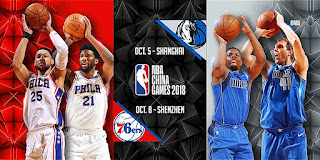 This year, the NBA is lending out a hand to some basketball lovers in India, too.

Eight Indian coaches from around the country, based on their performances at the various Reliance Foundation Jr. NBA programme events this year, have been selected to travel to China to attend the NBA China Games. The coaches will take part in the NBA Fan Day event in Shanghai on October 4 and then attend the two games in Shanghai and Shenzhen later in the week.

"It was quite unexpected and took me by surprise," said Sebastian to The New Indian Express. "I think this is a reward for all the hard work I have put in over the years. We will be watching two games of the highest standard and also meeting with coaches from across the globe -- all valuable experiences that I can put to good use in my coaching."

Even though its just the preseason, the coaches will be hoping to relish some top-notch NBA action and glean from coaches like Brett Brown and Rick Carlisle on the sidelines. Plus, there are so many more questions to consider before the start of the NBA season from the two participating teams. Will Embiid have social media access in China? Can Fultz shoot again? Does Simmons want to shoot? Is Nowitzki going to play? Will Doncic showcase his potential for being the rookie of the year?