NBA, FIBA, and the BFI to host second-ever Basketball Without Borders Asia Camp In India


A decade ago, the NBA took its first major chance in India, allowing the country to host the Basketball Without Borders Asia Camp - a prestigious event to scout and develop the best youth players in the continent - in New Delhi. The camp was a success, showcasing India's growing basketball prowess. The top players from 2008 emerged to be camp MVP Vishesh Bhriguvanshi, a guard from Varanasi who went on to carve a place for himself among Indian basketball greats and captain the national team. The NBA accelerated their devotion to India right after, hosting massive grassroots development programmes, elite national camps, a world-class academy, and involving the assistance of some of the league's top players to promote basketball in India.

10 years later, India gets a chance to start a new cycle of potential success.

"Ten years ago, India hosted its first-ever Basketball Without Borders Asia camp in New Delhi,” said FIBA National Federations and Sport Director Zoran Radovic. "We’re excited to return to the world’s second-most populous country where basketball has really taken off over the past decade. The sport is growing extremely fast and there are great development opportunities for boys and girls. We look forward to teaming up with the Basketball Federation of India and the sport’s wider community in India so that basketball can achieve its full potential in the country."

BWB Asia 2018 will bring together the top male and female players ages 17 and under from throughout the Asia-Pacific region to learn directly from NBA and FIBA players, legends and coaches and to compete against the best young players from the region.

As a new addition to the programme, the NBA and the BFI also today announced that from May 27 – 29, The NBA Academy India will host a basketball development camp for top female prospects from throughout India as part of The NBA Academies Women’s Programme. The NBA and the BFI will identify 20-25 female prospects ages 17 and under to attend the camp. 1996 Olympic Gold Medalist and Women’s Basketball Hall of Fame member Jennifer Azzi, two-time WNBA Champion Ruth Riley and former college coach Blair Hardiek – the global technical directors for women’s programming across the league’s seven academies – will oversee the camp.

"It is a great pleasure for the Basketball Federation of India to get the opportunity to host another BWB camp in India," said BFI President K. Govindaraj. "This will be a great learning experience for all the young and talented players from India as they will be under the guidance of few of the best basketball trainers in the world, which will help them grow as basketball players and make their country proud in the future. Another outstanding effort put in by the NBA Academy that is really appreciated by the Basketball Federation of India is the development camp for the top female prospects in the country, as it will help not only grow the players but also women’s basketball in India. We are already seeing the development of the sport here since the beginning of the NBA Academy in India and the Basketball Federation of India is ready to support the NBA as much as we can." 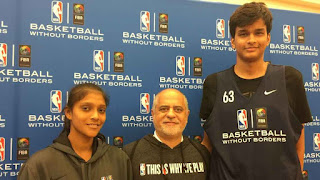 BWB Asia 2018 and The NBA Academies Women’s Program camp will also include a variety of NBA Cares and Jr. NBA community outreach efforts with youth in New Delhi in partnership with local community organisations. These programs will highlight the power of sport to promote cultural understanding while teaching the importance of a healthy, active lifestyle and the values of the game, including teamwork, integrity and respect. Nike, a BWB global partner since 2002, will outfit the campers and coaches with Nike apparel and footwear.

"It has been an exciting year for our youth basketball development programs in India, including the expansion of The Reliance Foundation Jr. NBA Program, the launch of The NBA Academy India, the opening of NBA Basketball Schools and now the return of Basketball Without Borders to India for the first time since 2008," said NBA India Managing Director Yannick Colaco. “We’re looking forward to hosting talented male and female players from throughout India and the Asia-Pacific region this May as part of Basketball Without Borders and The NBA Academies Women’s Program, and we thank FIBA and the BFI for supporting our continued efforts to grow basketball across the country."

BWB has reached more than 3,190 participants from 127 countries and territories since 2001, with more than 50 former campers drafted into the NBA or signed as free agents. A record 24 former BWB campers were on opening-night rosters for the 2017-18 season. The NBA and FIBA have staged 53 BWB camps in 33 cities across 27 countries on six continents. More than 250 current and former NBA, WNBA and FIBA players have joined more than 200 NBA team personnel from all 30 NBA teams to support BWB across the world.

The NBA Academy India, an elite basketball training center in Delhi NCR for the top male and female prospects from throughout India and the first of its kind in the country, officially opened in May 2017 and builds on the NBA’s existing basketball and youth development initiatives in India.

BWB Asia 2018 campers and coaches will be announced prior to the camp. Last year, two young Indian basketball players - Priyanka Prabharaka and Aashay Verma - were among the 67 boys and girls from 32 countries and territories to attend BWB's Global Camp held during the NBA All-Star Weekend in the United States.
Posted by KARAN MADHOK at 21:11