Earlier this week, 50 of the best young basketball players from around the country were invited from a national talent-search programme - the ACG-NBA Jump - to take part in the ACG-NBA Jump National Finals at the NBA Academy India in Greater Noida. After two days of rigorous training, scouting, and tryouts, the NBA has chosen eight winners from around the country. These eight young players will join the ranks of other prospects at the NBA Academy India and be at the forefront to receive what the NBA has called a "holistic, 360-degree approach to player development with focuses on education, leadership, character development and life skills." 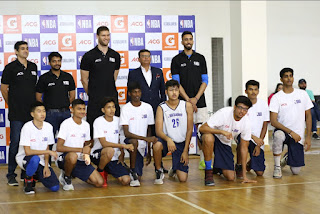 After the finals on May 3-4, the ACG-NBA Jump winners are:

17-year-old Tomar is the most experienced member of this group, after having represented and captained India in FIBA U16 Asia Championship and previously played at Italy's Stellazura Academy. Pune's Kokate has also played at a high level in the past, including an U15 international camp in Qatar.

NBA center Brook Lopez of the Los Angeles Lakers was in attendance for the National Finals of the ACG-NBA Jump as well as the Reliance Foundation Jr. NBA Finals at the Academy this week. Indian basketball star and recently a player for the NBA G-League's OKC Blue Amjyot Singh also attended the programme.

The NBA Academy India - an elite basketball training centre connected to similar NBA Academies around the world - opened at the Jaypee Greens Integrated Sports Complex in May 2017. Read more about how the Academy hopes to help realise India's basketball potential in my feature for SLAM Magazine.
Posted by KARAN MADHOK at 20:46