Two years ago, Robin Lopez took a memorable trip to India, hung out at the Taj Mahal, ate some Indian food, and showed up on Indian television to talk about the NBA. Two years later, Robin's older twin brother (by a few minutes, at least) Brook Lopez will follow on his footsteps. Now with the Los Angeles Lakers, the elder Lopez twin will take part in a number of NBA-organised activities in India during his trip from May 2-6 and continue to support the league's efforts to grow basketball in the country. 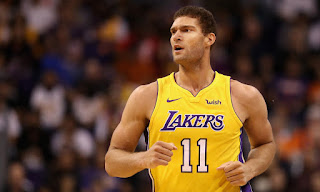 Lopez will first stop in the Delhi-NCR region on May 2, where he will attend the Reliance Foundation Jr. NBA National Finals at the NBA Academy India to interact with the boys and girls competing for the opportunity to represent India in the first Jr. NBA World Championship later this year. Lopez will also attend the ACG-NBA Jump Finals at the Academy on May 4 to help identify the top prospects who will receive scholarships and training to attend the NBA’s elite basketball training centre. On May 5, Lopez will travel to Mumbai for a live television appearance on Sony Six’s NBA wraparound show “Around the Hoop” to serve as a guest analyst to provide his insights on the 2018 NBA Playoffs.

"My brother Robin (Lopez of the Chicago Bulls) was in India not long ago and had an unforgettable experience," said Lopez. "There’s so much positive momentum around basketball in India and I’m glad to play a part in the growth of the game."

Lopez, a 7’0” center from Stanford University, was selected 10th overall by the New Jersey Nets in the 2008 NBA Draft, and played for New Jersey/Brooklyn for the first nine years of his NBA career. He became an All Star in 2013. He was traded to the Lakers last season, where he averaged 13 points per game.