This is not the first time you're hearing news like this in Indian Basketball, and it certainly won't be the last.

If you are an astute follower of this blog and Indian basketball, you will recall that, in August 2014, the Madhya Pradesh Basketball Association (MSBA) began dealing with an internal power struggle, as two separate groups of the association elected two different presidents, one group led by Kailash Vijayvargiya and the other by Avinash Anand. One group refused to recognise the other, the second group accused the first of misuse of funds. 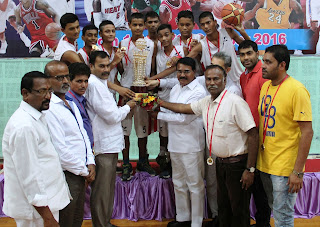 (This break-up will sound familiar, of course, because a similar division of associations happened at the national level with the Basketball Federation of India less than six months later.)

Now, a little more than two years later, Madhya Pradesh basketball is back in the news for the wrong reasons. Various sources reported that three members of the Vijayvargiya group - Secretary Kulwinder Singh Gill, president BJM Sharma and treasurer Ritu Sharma - have been booked by the police in Indore on Monday, December 5, for criminal breach of trust, fraud and forgery embezzlement in allegedly diverting association funds into private bank accounts. Police said cases have been registered under Sections 406, 417, 420, 467,468, 471 and 120B of the Indian Penal Code. The complaint of fraud was filed by the MPBA's other group - who go by the Corporation Basketball Trust - secretary Avinash Anand, and office-bearers Laxmikant Patel and Bhupendra Bandi late on Sunday night. According to Indore's Tukoganj police station in-charge Dilip Singh Choudhari (via The Times of India), the group accused the trio of diverting funds received by the association for personal use. Choudhari said the complainants had approached the crime branch twice before: once in 2012 and then again a couple of months ago, before the case was shifted to Tukoganj.

According to Anand, the trio - led by Gill - has been accused of siphoning off more than Rupees 40 lakh received as government grant to the association in 2010 towards hosting a national championship in the state.

Anand is quoted further by The Hindustan Times:

"Gill first illegally closed the association’s bank account with State Bank of India and opened a new account with Arihant Cooperative Bank. He then issued two cheques in favour of his mother, one for 5 lakh and the other for 3 lakh. A car insurance and LIC premium was also paid from this account, among other things. Later, this bank account was closed and a fresh account was opened with Bank of Baroda, again without due permission from the association."


A couple of months ago, Madhya Pradesh boys' team retained the Sub-Junior National Championship trophy in Hyderabad. But as it is often with Indian basketball, a big shot is followed by a turnover. Hopefully, the new administration keeps the same U14 sub-junior players in mind over themselves - the future of the state and the country - before repeating the mistakes of the past.