For second year, UBA holds camp for elite Indian players in the USA


For the second consecutive year, several top players and coaches from India's UBA Basketball League have been taken to Phoenix, Arizona, in the USA for an intense camp. Fifteen players and two coaches will be in intense training from December 10-21, and take part in various basketball-related activities like attending local NBA and NCAA games. 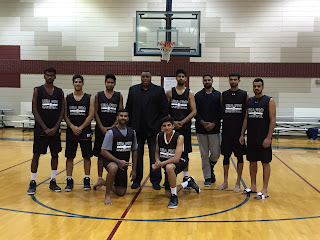 This is the second year that the UBA League - which completed its third season in India earlier this year - have taken its top players to get exposure abroad and improve their games.

The players attending the UBA camp in Phoenix this year are:

The players are taking part in two practices per day and will take part in two scrimmages with a local All Star team. Nine American players will be working each day with the Indian players at practice and conditioning, headlined by former San Antonio Spurs and University of Oregon player Alex Scales. There will also be several fun events like seeing a Phoenix Suns game amd an Arizona State game.
Posted by KARAN MADHOK at 23:33