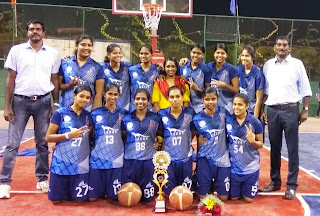 In India's most-competitive women's university championship, the reigning champions from Calicut once again rose above the rest to retain their title. Calicut University from Malappuram (Kerala) defeated Chennai's Hindustan University to win back-to-back titles in the All India Inter University Basketball for Women at KIIT Bhubaneswar (Odisha) on Thursday, December 29.

Led by Aswathy S Thampy (22) and Nimmy George (16) in the final, Calicut got off to a confident start, leading 32-20 over Hindustan at halftime. Calicut kept a steady hold on their lead in the second half to secure the 70-59 victory. Varsha Nandhini (23) and Srivihya S. Sekhar (17) led the way for Hindustan in a losing effort.

MG University from Kottayam (Kerala) took the bronze medal with a 66-41 win over Kannur on Thursday.