Damian Cotter - veteran Australian coach at the national and professional stage - was in India last week to visit the Indian Men's Basketball Team's national camp in Indore (Madhya Pradesh). Team India has been in camp at Indore's National Basketball Academy in the run up to the 21st Super Kung Sheung Cup to be held in Hong Kong later this month. Cotter visited the camp from December 1-4 to work with Indian players and coaches through four training sessions, focusing on both offensive and defensive drills. 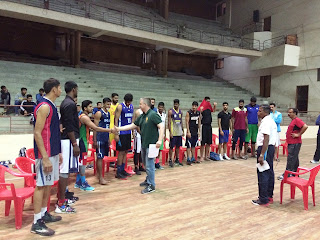 The visit was arranged by Pursuit India with the help of Danny Kordahi of No. 1 Draft Pick Basketball Academy, a leading Australia based training academy.

Currently a Basketball Consultant, Damian Cotter is a former Sydney Kings (National Basketball League - NBL Australia) coach and Australian National Women’s assistant coach. With more than 17 years of experience as a basketball coach, Cotter is highly regarded in the professional coaching arena and has a passion for teaching basketball to all ages.

"I was not only impressed with the players’ talent but more importantly their work ethic and capacity to learn," Cotter said after the training camp in Indore. "You can see that they have been well coached and I look forward to watching the team results from afar. I am very grateful to BFI [Basketball Federation of India] and Pursuit for the opportunity to work with quality players and coaches, as I see potential for India to achieve success internationally at a high level." 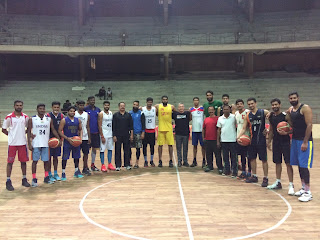 "Cotter’s visit was very useful," said S. Bhasker, who is currently the Head Coach for Team India, "Most teams today employ the ‘horns offence’ and Cotter ran the team through a series of ‘shell drills’ that emphasizes maintaining proper defensive positions in order to counter this offence."

“Basketball has evolved drastically in terms of the way it is played. So visits from foreign coaches help us a lot. The entire team benefits and it is also a chance for individual players to showcase their talents in the hope of landing playing opportunities abroad,” said centre Amritpal Singh.

Vishnu Ravi Shankar, the Business Head of Pursuit, who coordinated the visit added, “Being the first such initiative of its kind, we are excited that Coach Cotter’s sessions were well received by the players and coaches alike. We thank the Basketball Federation of India for their smooth approval process. Even the local organisers were very kind and provided us good accommodation close to the venue. We definitely hope to facilitate more such camps in the future for the benefit of India Basketball and its players."

It is interesting to note that, ever since the summer of 2015, India has not had a steady Head Coach. For several years in a row, the national team employed various foreign Head Coaches for short stints, culminating with the memorably successful run of Scott Flemming. But Flemming resigned from the Indian team in May 2015, and the team's head coaching duties have been shared between various local coaches over the past 18 months. The split between the BFI last summer is a major reason that the federation hasn't gone out and hired another (expensive) foreign coach; perhaps Cotter's visit will rekindle the mutual interest between foreign coaches and India, or at least continue the conversation of bringing in their experience to share with coaches and players of the national team.