According to FIBA, the world's governing body of basketball, harmless religious/cultural headgear is harmful to other players on the basketball court. And despite no evidence to this archaic ruling (already abolished by several other sporting bodies, including FIFA), FIBA continues to uphold a ban on athletes who wear headgear like the Sikh turban, the Muslim hijab, or the Jewish kippah. A couple of years ago, this ruling caused worldwide controversy when two crucial Sikh players of India's national basketball team - Amjyot Singh and Amrit Pal Singh - were barred from playing in a game at the FIBA Asia Cup because of their headgear. FIBA promised to review the headgear rule but eventually ended up delaying their decision. 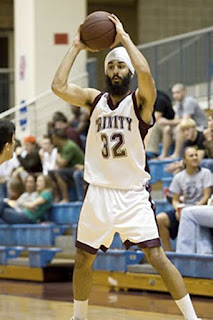 FIBA suspended the ban for a two year period in 2014, and with that suspension period coming to an end, the time to make a permanent decision is here.

Nothing brings together people of differing faiths than a common adversary, and in protest to FIBA's continuing headgear ban, over 50 interfaith and advocacy organisations - including The Council on American-Islamic Relations (CAIR), the Sikh Coalition, and MPower Change - released an open letter to addressed to FIBA President Horatio Muratore. The letter spotlighted two American athletes who have been directly impacted by FIBA’s discriminatory policy: Bilqis Abdul-Qadir, who made history in 2010 to become the first Muslim-American NCAA basketball player to compete wearing the Islamic headscarf, and Darsh Preet Singh, who in 2004 to become the first Sikh-American NCAA basketball player to compete wearing the Sikh turban.

Excerpts from the open letter to FIBA:

We, the undersigned, are calling on the International Basketball Federation (FIBA) to revise its policies that prohibit otherwise qualified athletes from pursuing a professional career as basketball players due to religious restrictions beliefs that require requiring them to wear a head-covering.

We understand FIBA is expected to announce a permanent decision in the near future on whether the ban on religious accommodations will be enforced. We believe this rule, as it stands, violates basic religious rights of athletes like [Darsh Preet] Singh and [Bilqis] Abdul-Qaadir, and countless others, and defies international human rights norms.
FIFA's International Football Association Board has acknowledged the religious rights of athletes by changing its rules to allow hijabs and Sikh turbans

No athlete should be forced to choose between faith and sport. Muslim women and Sikh men seeking to participate in sporting activities like anyone else should not face superficial and arbitrary barriers to that participation.


Check out the full letter with the complete list of supporters here.

It's time for a change, FIBA. The world has a larger variety of people than those sitting in plush office blocks out in Switzerland, and this variety loves basketball, too. It's time to become more inclusive and erase Article 4.4.2 of the Official Basketball Rules forever.