One and a half years ago, Canadian basketball player Sim Bhullar made history for the desi community worldwide as the Sacramento Kings gave him a chance to become the first player of Indian descent to play in the NBA. During his short, 10-day contract with the Kings (owned by India-born Vivek Ranadive), Bhullar played just three minutes in three games and scored one basket. But in his brief moment in the sun, the 7-foot-5 talent from New Mexico State University had done enough to scribble his name in the pantheon of Indian basketball players around the world. 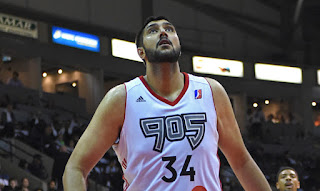 Now, Bhullar, who last played his trade for his hometown NBA D-League squad Raptors 905, has taken a bold new career step, away from the spotlight of North America. Earlier this week, it was announced that Bhullar has signed with the Taiwanese basketball team Dacin Tigers, who are one of the strongest teams in Taiwan's top tier Super Basketball League (SBL). Bhullar will become the tallest player ever in the SBL.

Bhullar's decision to play in Taiwan may be financially motivated, suggested Blake Murphy on the Raptors Republic blog. The D-League salaries are low, and playing in Asia may give Bhullar more chance to earn and also become a centerpiece for the team. But the risk remains that this move may hurt his visibility and potential return to play in the NBDL or the NBA.

Apart from his extremely brief NBA stint, the big man had spent the rest of his two-year professional basketball career after leaving New Mexico State in the NBA D-League, playing with the Reno Bighorns and Raptors 905. Although he started slow, he showed considerable improvement for 905 in his last few months with the team, eventually finishing with averages of 9.6 ppg, 6.9 rpg, and 1.3 bpg at the end of the 2015-16 season. 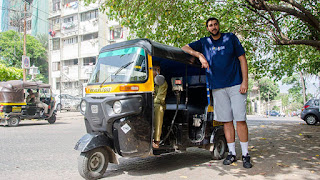 Bhullar, the son of Punjabi immigrants to Canada, remains closely tied to his Indian roots, and took a high-profile trip back to India last year with the NBA to promote basketball in the country. He will become the first player of Indian-origin to play in the SBL.
Posted by KARAN MADHOK at 21:20