Indian Basketball legends team up in Delhi to spread a positive message: Save our game!


Indian Basketball is in dire straits. A damsel or a dame in distress, lying punctured out of air, begging for a saviour to help it bounce back up again. The past 11 months have seen the Basketball Federation of India split into two competing executive committees, cry all the way up to the international basketball federation - FIBA - for rescue, and suffer detrimental interference from the Indian government and the Indian Olympic Association (IOA). The fraction between the BFI and the IOA led FIBA to refuse recognition of basketball at the ongoing South Asian Games in Guwahati, and eventually, see IOA cancel the basketball tournament at the tournament altogether. 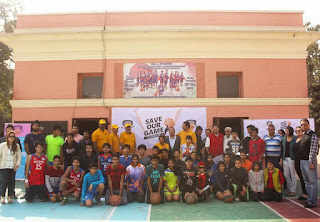 To save the future of the game, it is the voices of the past who are now speaking the loudest.

The Indian Basketball Players Association (IBPA), an independent coalition of some of India's finest former players, coaches, and referees, held a 'Save Our Game' campaign at the Modern School in New Delhi on Sunday, February 14th, to shed light on the troubling trends in Indian hoops and preach a message of solidarity between the fighting factions of the BFI. Led by Secretary-General Jayasankar Menon, the IBPA brought together some of India's finest retired players to the event to hold clinics and speak to around 70 school-kids about healing the fractured future of the game.

"The IBPA is not supporting any factions," Menon told me in an interview on Sunday, "We are concerned with the welfare of the players. The Indian basketball legends appeal for an amicable solution [for the BFI]." 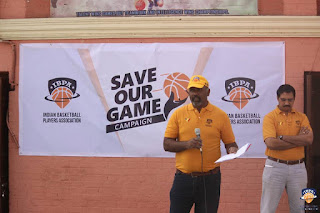 Aiming to give a voice to Indian basketball players - current and past - the IBPA was officially formed in New Delhi last summer. The associations includes various Team India legends, including several Arjuna awardees, Dhyan Chand awardees, an Asian all-star player, former Indian captains and a number of international and national players.

The cancellation of the South Asian Games (SAG) basketball event came as a rude shock to all the seven countries participating in the tournament, which was scheduled to begin on February 11th. Many of the countries, including India, sent Men and Women's teams to the SAG regardless, but without official sanction, they have only played in exhibition games in Guwahati.

"We can understand the feelings of players who had gone to the South Asian Games and became spectators," Menon added, "We know that they are losing financially, too, as a Gold medal was almost [guaranteed]. Even though the IBPA is Indian Basketball Players Association we are concerned with other players of the South Asian region, too."