They called it 'Jai Ho Magic' as an ode to another recent Indian cliche, and, like other NBA franchises who have understood the importance of reaching out to the Indian diaspora, the Orlando Magic held 'India Day' in their win over the Boston Celtics at Orlando's Amway Center on Sunday, January 31. Bollywood superstar and international humanitarian Madhuri Dixit joined in the full day of cultural festivities for Magic fans.

The Indian American Chamber of Commerce (IACC) led Orlando’s official India Day Celebration in Downtown Orlando on January 31st. The IACC created a full line up of excitement showcasing the Indian culture and community including an Indian Street Festival in front of the Amway Center. Through their ongoing partnership with the Orlando Magic, the IACC featured in-game festivities and several private events at the game. This cultural tradition was officially recognized by the NBA as the “Best Heritage Night in the NBA” in both 2014 and 2015. 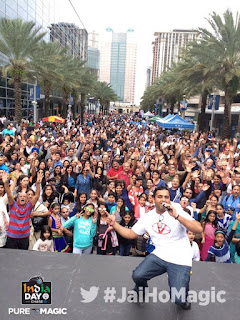 The IACC hosted Madhuri Dixit, an award-wining Bollywood actress and UNICEF Goodwill Ambassador, who was the guest speaker at the IACC Fireside Chat entitled “Powerful Indian Women.” Madhuri was interviewed center-court at the Amway Center by Beena Parikh earlier in the day. IACC announced a partnership with TV Asia, an information and entertainment channel for the South-Asian community in North America, to produce a segment on India Day as well as to broadcast the “Powerful Indian Women” Fireside Chat with Madhuri Dixit LIVE from the Amway Center to one million US viewers.

Orlando Mayor Buddy Dyer gave his official proclamation as January 31, 2016 at India Day in Orlando. Recognizing the fourth annual India Day event as a celebration of Indian-American heritage, culture and music in Central Florida and in commemoration of India's Republic Day (January 26), which honors the date on which the Constitution of India came into force. The proclamation was delivered by Orlando District 5 Commissioner Regina Hill at the Amway during the India Day celebrations. 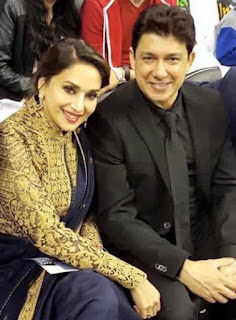 “We are proud to partner with the Indian American Chamber of Commerce for the fourth consecutive year to host India Day Presented by Chase,” said Orlando Magic CEO Alex Martins. “Sports truly is a rallying point that can bring all people together and speak any language. India Day is just one way for the Magic to show its appreciation to this segment of our fan base for their support and dedication."

As for the game itself, the Indian blessings turned out to be fortunate for the home team, as Orlando snapped their eight-game losing streak with a 119-114 win over Boston. Aaron Gordon was the Magic's star of the night with 19 points and 14 rebounds, and a dunk that worth that cliched 'Jai Ho'.
Posted by KARAN MADHOK at 21:11