FIBA Asia - the continent's governing body for basketball - held the second meeting of their 2014-19 Central Board in New Delhi, India, the past weekend. During the meeting, FIBA Asia finalised the basketball calendar of 2016 international events and took steps to prepare national federations for the region's flagship competition - the new FIBA Asia Cup - in 2017. The meeting was hosted by the Basketball Federation of India (BFI). 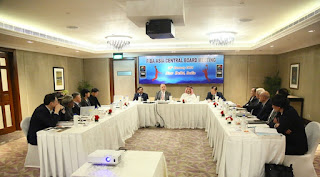 Until recently, the biggest Asian basketball tournament has been the biennial FIBA Asia Championship, a competition held separately for Men and Women to determine the best team in the continent and to alternatively choose the Asian representative for the Olympic Games' basketball tournament and the FIBA World Cup. But starting in 2017, the format and nomenclature is set to change. The 'FIBA Asia Championship' will now become the 'FIBA Asia Cup' and for the first time, incorporate FIBA Oceania as well to include teams like Australia and New Zealand in the same competition as China, Iran, Philippines, India, etc. The new FIBA Asia Cup will be held every four years. Meanwhile, the biennal tournament previously known as the 'FIBA Asia Cup' - which incorporates 10 best teams in Asia for a tournament - will be changed to the 'FIBA Asia Challenge' and held under it's new moniker for the first time later this year.

FIBA Asia Central Board announced the upcoming season of events, with their full schedule and host countries:
The Central Board also decided to set a re-worked strategy for promoting FIBA 3x3 basketball competitions in Asia. It was also at this meeting that FIBA Asia discussed the current conflict between the BFI and the Indian Olympic Association (IOA). With the 12th South Asian Games basketball tournament tipping off in Guwahati, India, next week, the IOA held trials to choose Indian national teams against the BFI's wishes. Due to this, FIBA sent a letter de-recognizing the tournament altogether and asked all South Asian teams to refrain from taking part.