The best of India's under-14 basketball talent got together on the same platform in Puducherry for a week of exciting hoops at the 2016 National Basketball Championship for Sub-Junior Boys and Girls from February 2-8. The 42nd edition of this long-running event came to an end with two closely-contest final games on Monday, February 8th. Madhya Pradesh's boys retained their title with a heart-thumping overtime victory while Chhattisgarh Girls bounced back from their final loss at the tournament's previous edition to claim top spot again. 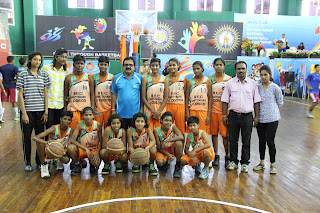 Organized the Basketball Federation of India (BFI), the 'Sub-Jr Nationals' were held at Puducherry's Rajiv Gandhi Indoor Stadium. A total of 23 boys' teams and 27 girls' teams from around India participated.

Chhattisgarh returned to the girls' final with an aim to recapture their spot at the top of the podium after losing to Kerala in the final at Nashik 15 months ago. Facing a strong Tamil Nadu side, Chhattisgarh started the final contest on Monday in style, rolling to a 21-8 lead early in the first quarter. While their shots were falling off, TN played tough defense to close the gap after halftime and make it just a seven point game before the final period. Behind the efforts of Elizabeth Ekka (24 points), Chhattisgarh were able to hold on to a 54-48 win and celebrate as champions. Pavithra Sree led TN with 16 in the loss.

The boys finale pitted the tournament's two best teams - Madhya Pradesh and Chhattisgarh - against each other, and the close finish showed that the two neighbouring states had little to separate them on court, too. The final was a repeat of the tournament's previous edition, where MP had defeated Chhattisgarh in a high-scoring game to win the gold. On Monday, it was Chhattisgarh who got started off on the right foot, with hopes to overturn their bitter loss last time and double up on the success of their girls' team. In a defensive contest, Chhattisgarh held on to a 31-20 lead at halftime. But the halftime break seemed their opponents the boost they needed, and MP turned the tables on Chhattisgarh by making a big comeback to take the lead. Chhattisgarh equalized the game in the last 10 seconds of regulation at 53-53, and when time expired, the game went into overtime. MP, fueled by their second-half momentum, separated themselves from their rivals in the five extra minutes to repeat as champions, 64-59. The duo of Jeet Kharwar (21) and Brijesh Tiwari (19) walked home as the most valuable performers in the final for the winning side. 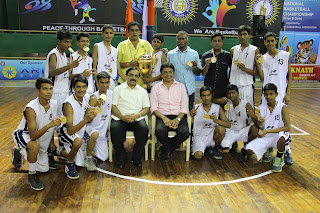 Earlier in the day, the fight for the bronze medal took place in the girls’ and boys’ categories. In the girls' 3rd place match, Maharashtra comfortably defeated Madhya Pradesh 63-36 to capture the bronze medal. In the boys’ category, Rajasthan clinched 3rd place defeating Uttar Pradesh in a close game 71-66. Despite a few late mistakes, Rajasthan held on to their slim lead to close out the game and take home the bronze medal. Rajveer’s 21 points were crucial for Rajasthan. UP's Priyanshu put up a game-high 25 points in a losing effort, while Aniket added 16.

A day earlier, Chhattisgarh girls were made to sweat till the very end in a tightly-contested semi-final contest against Maharashtra. Elizabeth Ekka exploded for 30 to give Chhattisgarh an early lead, but Maharashtra bounced back behind the efforts of Shruti Bhosale (16) to take the game into the fourth quarter. Chhattisgarh showed their late-game class and nerves to edge past for a 66-61 win in the end. In the other girls' semi-final, the trio of Pavithra Sree (20), Deepa D. (18) and Hari V. (16) led Tamil Nadu to a 70-57 win over Madhya Pradesh, blowing open a close game with a huge fourth-quarter run. Rajvi Desai scored 27 for MP in the loss. 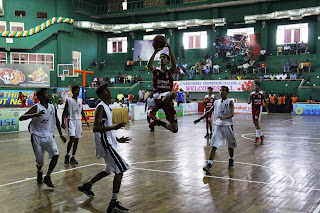 MP found more favour in the boys' semi-final game, where they had defeated Rajasthan 59-46 behind a 25 point effort by Pankaj S. Rajveer SB scored 18 for the losing side. Chhattisgarh had little trouble getting past Uttar Pradesh despite a game-high 29 points by UP's star Priyanshu. Chhattisgarh started slow, but gained momentum as the game progressed and were in complete control of the second half en route to the 70-49 win. Rishab (18) and Sajjad (16) led Chhattisgarh's scoring surge. 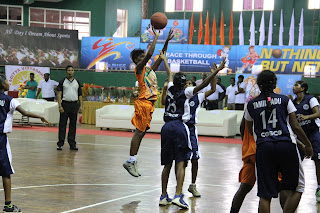