Last month, the NBA launched a unique talent hunt programme in India to find the young basketball player with most potential in the country. Joining hands with the ACG Worldwide Group, the NBA introduced the ACG-NBA Jump for players between the ages of 18-22 from around India. Tipping off in the third week of October in New Delhi, the ACG-NBA Jump is scheduled to be held in six Indian cities, pick a shortlist of the finest talents, and then train them to find the best among the best. The winner of this talent search will be given a shot to attend the NBA D-League tryout in the USA next year. 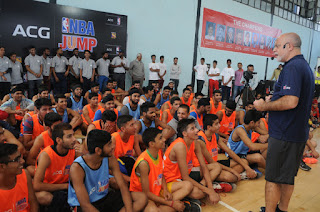 After a successful opening tip in New Delhi last week - which featured India's first NBA pick Satnam Singh as a special guest - the ACG-NBA Jump moved to the city that made Satnam the teenage star that he was: Ludhiana, Punjab. The second leg of the ACG-NBA Jump was held at Ludhiana's famed Guru Nanak Stadium on Saturday, November 21st. Senior Director of Basketball Operations for NBA India Carlos Barroca was among the coaches headlining this event and keeping their eye out for potential star talent from the city and nearby.

The first-of-its-kind ACG-NBA Jump programme will be split into three phases. In the first phase, six regional, one-day elite camps will be held in six cities: Delhi (Oct 26), Ludhiana (Nov 21), Hyderabad (Nov 28), Mumbai (Dec 12), Kolkata (Jan 9), and Chennai (Jan 16). Around 3-5 international coaches from across the globe will conduct the open try out session in all the six cities.The second phase will consist of a national elite training camp where 32 players selected from the six regional camps would assemble for a four-day training period. In the third and final phase, one top player from the national elite training camp would be selected to attend the NBDL Tryout in the USA for the opportunity to earn a spot on a D-League roster. The selected player would continue to undergo training up until the tryout in June 2016. Sony SIX, the official broadcaster of the NBA in India, will create a feature around ACG-NBA Jump, following the programme through its various stages and tracking the winner till his NBA D-league tryout.