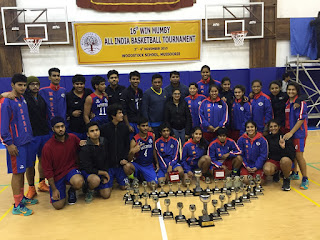 Perched over 7,000 feet above sea level in the Himalayas can be a challenging place for basketball, but its only from the challenge that the most elite of young talents can emerge. Woodstock School in Mussoorie - my alma mater! - hosted the 16th Win Mumby All India Basketball Tournament from November 3-6. Both boys and girls finals were held on Friday, November 6, with Modern School from New Delhi hoisting both the titles in an impressive clean sweep.

Led by Sunil Rathee - one of the top young players in Delhi state - Modern's boys team showed no mercy to hosts Woodstock in the boys' final, running to a blowout 65-33 win. Earlier in the day, Modern's girls defeated Welham Girls from Dehradun behind a strong effort by Ragnee Jha. 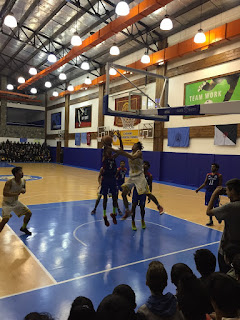 Modern's Ragnee Jha was named the MVP in the girls' section, while Woodstock's Dipankar Nakarmi was the boys' MVP.

Padma Shri winning actor and former captain of Woodstock's basketball team Tom Alter was the chief guest at the event.