2014: The Year in Indian Basketball


Flip the calendars and adjust your dates. It's now 2015, and so much has changed in Indian Basketball in the past 12 months. Peaking with India's memorable victory against China mid-way through 2014 as well as other positive international performances, you could say that it was the year that basketball in the country truly began to grow up. Domestically, Indian basketball players were involved in bigger and better BFI, NBA, and Reliance Foundation events, events that reached to farther corners of the nation than ever before.

Let's look back at some of the biggest news stories from 2014 in Indian Basketball. 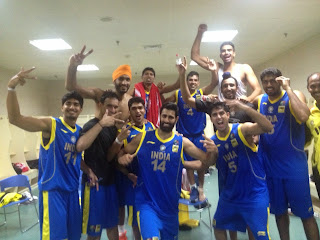 - In January over in Ahmedabad, ONGC repeated as Federation Cup champions with a big win over rivals IOB in the final, while Chhattisgarh's Women's side closed out the tournament in thrilling fashion with a one-point win over Maharashtra. Chhattisgarh's Radhakrishnan and ONGC's Vishesh Bhriguvanshi were named tournament MVPs.

- ONGC were back atop the podium the next week, defeating IOB once again in Mumbai to win the 9th Savio Cup in Mumbai. Although they started as favourites to hold on to their title, Southern Railway had to battle till the very end and use every bit of their talent and experience to outlast the spirited hosts Maharashtra in the Women's final.

- Goa played host to the 2014 Lusofonia Games, and Indian Basketball Men's team gave the home fans a real reason to celebrate. Under Head Coach Scott Flemming, India defeated Angola in thrilling fashion to win gold at the Games' basketball tournament. They were undefeated through the course of the tournament. India's Women's team - comprising mostly of under-21 players - finished with a bronze medal. Mozambique won Women's gold.

- Former NBA point guard Muggsy Bogues returned to India for his second trip in the first week of February. Bogues took part to assist the first season of the Reliance Foundation Jr. NBA programme in the country: he visited Mumbai and Kochi to train the hundreds of players and coaches involved in the events. 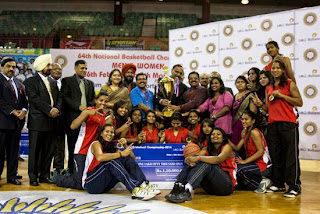 - The 64th National Basketball Championship for Men and Women was delayed in 2014 and finally tipped off near the end of February in New Delhi. The delay wasn't the only anomaly: Chhattisgarh's Women ended a 10-year dominating run by Indian Railways at the Senior Nationals by defeating the pre-tournament favourites in the finals to snatch the winner's trophy. Meanwhile in the Men's section, Tamil Nadu's played some brilliant basketball through the course of the tournament and defeated Punjab to secure gold. Tamil Nadu's Rikin Pethani and Chhattisgarh's Kavita Kumari were given the Harish Sharma Most Valuable Player trophies at the end of the tournament, an award named in honour of the BFI's former CEO who passed away two years ago. Former NBA Head Coach Del Harris was a special guest at the nationals and held a 'Train the Trainers' clinic for attending and local coaches and players.

- After six months of action in eight cities, the finals of the 1st BFI-IMG Reliance National School/College League were held over five days in early May in New Delhi. Teams from Ludhiana and Chennai made their home cities proud with championship medals.

- The 64th Junior National Basketball Championship for Under-18 Boys and Girls - held at Kochi (Kerala) from May 26th to June 2nd - came down to a double rematch in both the divisions from last year's Finals. Chhattisgarh defended the girls' title with a second consecutive Final victory over hosts Kerala. Punjab's Boys redeemed themselves after last year's loss in Cuttack to snatch the title over Delhi with a win in the Boys' finale. Punjab's Arshpreet Singh (Boys) and Chhattisgarh's Sharanjeet Kaur (Girls) were named MVPs.

- NBA point guard Isaiah Thomas - who was with the Sacramento Kings until the summer and is now with the Phoenix Suns - visited India in June 2014. Thomas spent time in Mumbai and Chennai, where he visited schools, community organizations, and conducted youth clinics. He also joined the NBA's official broadcaster in India Sony SIX to provide analysis of the NBA Finals.

- Three Indian players - Vishal Gupta (Andhra Pradesh), Ashish Briggs (Madhya Pradesh), and Mahipal Singh (Rajasthan) - were invited to NBA/FIBA's Basketball Without Borders camp in Taipei from June 13-16. There were among 50 of the top young players from Asia and Oceania at the camp.

- By defeating Bangladesh and Sri Lanka on consecutive nights in July at the Koramangala Indoor Stadium in Bengaluru, India's U18 men's squad won gold at the South Asian Basketball Association (SABA) Qualifiers for the 23rd U18 FIBA Asia Championship. They qualified to represent South Asia at the U18 FIBA Asia tournament in Doha (Qatar).

- The highlight of 2014 - and really, one of the All Time highlights in Indian basketball history - was India's campaign at the 5th FIBA Asia Cup in Wuhan. In their second game of the tournament India defeated hosts and Asia's top squad China on their home soil, 65-58, in the 'Wonder of Wuhan'. India gave a scare to the continent's other top teams, and despite the Quarter-Final exit and just a seventh place finish, Flemming's team displayed performances on court that are sure to earn them respect in major Asian tournaments in the future. Iran eventually recaptured gold the gold by defeating Chinese Taipei in the final. The tournament was also notable for the flare-up of the nasty FIBA Headgear controversy, hurting India's Sikh star players Amjyot Singh and Amrit Pal Singh. 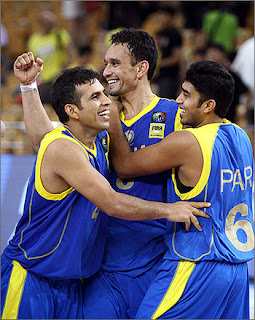 - India's junior boys' squad disappointed at the 23rd FIBA Asia U18 Championship in Doha (Qatar), finishing 13th (last), losing two of their three Preliminary Round games and failing to qualify for the next stage of the tournament. China played fantastic basketball through the course of the 10-day tournament and made this their 11th gold overall in the tournament. The FIBA Headgear controversy returned, as India's Anmol Singh was forced to remove his turban in the first game against Qatar.

- In mid-August, NBA India launched the biggest ever iteration of the NBA Jam, the hugely popular college basketball and youth festival, spreading out to 16 cities and involving a greater number of young Indian basketball fanatics than ever before.

- On August 29, Indian basketball superstar Geethu Anna Jose added another feather to her cap by being officially conferred the Arjuna Award - prestigious national award handed to sports-persons in India by the Government of India - by President Pranab Mukherjee at the Rashtrapati Bhavan in New Delhi. Jose became the 17th basketball player in India to receive this award, but only the first since 2001. She was also only the second women basketball player to win the Arjuna Award since Suman Sharma in 1991.

- With the expectation to engage over 750,000 youth basketball players and train PE teachers at more than 1,000 partner schools across India, the Reliance Foundation Jr. NBA programme returned with a bang for it's second year in early September, expanding from three Indian cities to eight. The programme focus was on inspiring youth to adopt a healthy, active lifestyle by integrating basketball into each participating school’s physical education curriculum. 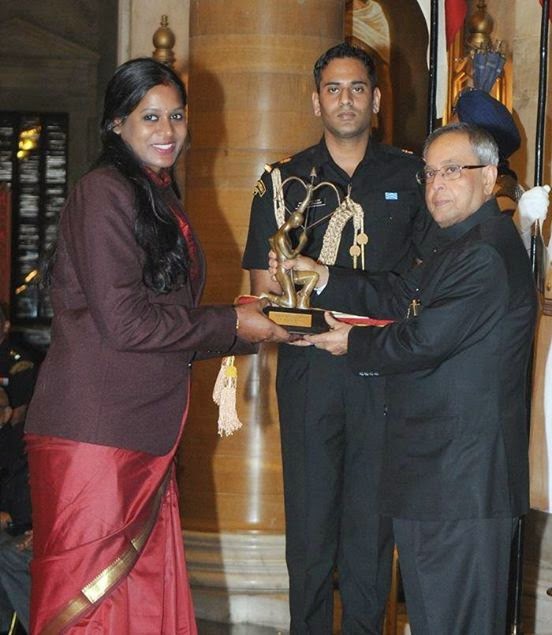 - There was massive expansion elsewhere, too. By the end of September, the Basketball Federation of India (BFI) and IMG Reliance announced the new seasons of the Indian School Basketball League (ISBL) and the Indian College Basketball League (ICBL), to be held in 22 and 21 Indian cities respectively. Over 1100 institutions and 13,000 combined school or college students - both men and women - were set to participate in the ISBL and ICBL in 24 total cities.

- India's Senior Men's and Women's National teams played at the basketball tournaments at the 17th Asian Games in Incheon (South Korea). Topsy-turvy performances by India saw some positive moments but also left a lot to be desired. India's Men finished 12th (out of 16) and Women finished 6th (out of 11). South Korea defended their home turf in style, as both their Men and Women's squads outperformed higher-ranked squads to secure the gold medal.

- In mid-October, at the 31st Youth (U16) National Basketball Championship for Boys and Girls in Chandigarh, Tamil Nadu defeated Kerala in both the boys' and girls' finals to win double gold medals. TN's star performers through the course of the tournament - Eshwar PB (Boys) and Ishwarya J (Girls) - were named MVPs.

- With a victory over rivals Japan in the final, the Chinese eves completed a three-peat of titles at the FIBA Asia U18 Championship for Women in Amman (Jordan) on Friday, October 17th. This was China's 14th overall title in the 22nd edition of the tournament as they continued to be the driving force in junior Asian women's basketball. India, who played in the tougher Level I of the tournament, lost all their preliminary group games but won the crucial Level I qualifier against Malaysia to remain in the higher fray of the competition for 2016.

- From October 15-19, the city of Bengaluru hosted the inaugural Mulki Sunder Ram Shetty All India Basketball tournament, a men's championship that featured six of India's top club level or state teams. After five days of high-notch basketball, the tournament was settled with a comfortable final win by Indian Overseas Bank - IOB - against their Chennai city rivals ONGC. 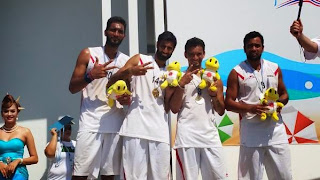 - India's senior men and women took part in the 2014 Asian Beach Games 3x3 Basketball tournament in Phuket (Thailand). After an undefeated run, India's Men were finally defeated in the final by Qatar and had to settle for the silver medal. India's Women - reigning champs from 2012 - could not repeat their success after choosing to send a far less experienced team to Phuket. India lost all three of their games to finish at seventh place.

- Madhya Pradesh (Boys) and Kerala (Girls) lifted the winner's trophies at 41st Sub-Jr National Basketball Championship for Boys and Girls in Nashik (Maharashtra), with both teams defeating Chhattisgarh in the final. The MVP awards were handed to Kerala's Sreekala R (Girls) and MP's Mani Thakur (MP).

- NBA Commissioner Adam Silver closed his first year as the head-honcho of the league with his first-ever visit to India, and he brought along Kings' Indian-born owner Vivek Ranadive and former Kings/Lakers player Vlade Divac. Silver, Ranadive, and Divac spent their time in Mumbai, visiting a school as part of the Reliance Foundation Jr. NBA programme and interacting with the Indian press. 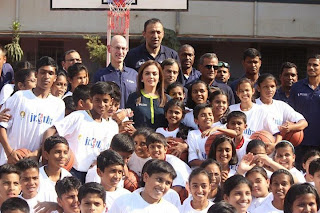 - Towards the end of December, New Delhi hosted the national finals of the Indian School Basketball League (ISBL) and Indian College Basketball League (ICBL), featuring the winning 40 school and college teams in the men's and women's divisions from 10 cities. After seven days of exciting hoops action, the representatives of two cities - Chennai (Tamil Nadu) and Ludhiana (Punjab) - separated themselves from the rest of the pack to win their respective 2014 titles.

- On the eve of the launch of the 65th Senior National Championship in Bhilwara (Rajasthan), the BFI named December 28th as the official 'Indian Basketball Day', in honour of the late former BFI CEO Harish Sharma on his birthday. On this day, the best players in the country took part in Men and Women's All Star games and a Slam Dunk contest. Cultural performances, prize distribution, and a remembrance ceremony for Sharma was also held.

It was indeed a year to remember, and India can take heed in successes at the Lusofonia Games, the FIBA Asia Cup, and the Asian Beach Games internationally. Back home, the involvement of new cities in grassroots programmes will play a big role in the future development of basketball talent. The interest shown from FIBA and the NBA, as well as the continuing growth of the BFI, promise bigger things ahead for 2015.