Poonam Mahajan - a Member of Parliament from Mumbai North Central and a politician of the BJP - was voted in unanimously as the new president of the Maharashtra State Basketball Association (MSBA) during the Annual General Meeting of the association on Sunday, January 18th. Mahajan becomes the first women to be MSBA president in the association's 65-year history, reported The Times of India.

Mahajan succeeds outgoing MSBA president Jaidev Shroff to the post, who now becomes the MSBA's chairman. The previous chairman of the MSBA was M Venkatesh.

Mahajan told The Times of India that her plans for the MSBA include providing support for the players and improving basketball infrastructure in the state.

"It is quite amazing to see basketball being played across all villages in Maharashtra. Basketball has been my favourite sport since childhood and I am very fortunate to lead MSBA," she said.

"The challenges are enormous but with my experience, I will be able to meet them. It will be my endeavour to take the game to even greater heights with the help of all my colleagues in MSBA." 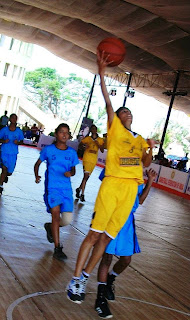 Maharashtra has some of the richest basketball culture in all of the country, featuring well-organized district, state, college, and school tournaments as well as playing host to some of India's best national invitational tournaments, like the Savio Cup and the Ramu Memorial Basketball Tournament. Kudos to Mahajan for breaking a gender barrier in the MSBA fraternity, but how much sense does it make to hand someone with no basketball playing/operational experience (except for it being her "favourite" sport) to lead the basketball association of the entire state?

Basketball in Maharashtra has not been without its turmoil over the past year. In November, the MSBA faced protest from several district associations from the state in the form of a letter requesting for a removal of MSBA officials for causing irregularities, miscommunication, and the misuse of power. That letter was sent to the media by Shatrughan Gokhale, the secretary of the Nagpur District Basketball Association. After the most recent AGM on Sunday, Gokhale was named one of the five vice-presidents of the MSBA.