It may be the 'Holiday Season' for most of the world, but for the top talents of Indian basketball, the most serious time of the year has begun. At Bhilwara in Rajasthan, 51 combined Men and Women's teams from across the country have assembled to take part in the biggest event in the nation's domestic hoops calendar: the Senior Nationals. The 65th Senior National Basketball Championship for Men and Women tipped off in Bhilwara on Monday, December 29th. The championship is being organised by the Bhilwara District Basketball Association in collaboration with the Rajasthan State Basketball Association under the aegis of Basketball Federation of India (BFI) and IMG-Reliance. A day before the launch of the championship, the BFI celebrated 'Indian Basketball Day' in honour of late CEO Harish Sharma. On this day, the best players in the country took part in Men and Women's All Star games and a Slam Dunk contest. Cultural performances, prize distribution, and a remembrance ceremony for Sharma was also held.

27 men’s teams and 24 women’s teams are participating in this event that will be played in a league-cum-knockout format. The last iteration of the tournament was held in March 2014 at New Delhi and won by Tamil Nadu (Men) and Chhattisgarh (Women).

On the first day of the tournament, Kerala's Women started off with a dominant victory over Andhra Pradesh 78-39, as two Suryas from each side battled against each other. Kerala were led by Surya PR, who scored 19 points, while Jeena PS added 17. For AP, A Surya scored 23 in the loss. In another dominant showcase of talent, Tamil Nadu's women doubled the output of Uttar Pradesh to blow them out 72-36. Sunita led all scorers on the game with 20. 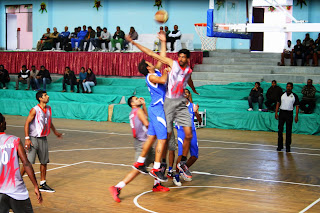 In an early Men's game, Indian Railways took a 10 point lead over Chhattisgarh in the first quarter, and held on to their advantage till the very end en route to a 76-66 win. M. Mishra (25) and H. Singh (16) were leading scorers for Railways, while AP Singh (20) and Kiranpal S (18) were the high scorers in a losing effort for Chhattisgarh.

The Indian basketball fraternity celebrated 'Indian Basketball Day' on Sunday, December 28th in honour of the late Harish Sharma's birthday. Senior BFI officials such as RS Gill, Ajay Sud, Nandini Basappa, K Govindraj, PJ Sunny and Naresh Aneja (FIBA Commissioner) spoke on the occasion and recalled Sharma’s contribution to the sport. Sharma had been instrumental in inking the long term contract with IMG-Reliance in 2010 that has led to a drastic improvement in facilities for the players, coaches and others involved in the sport.

As part of the ‘Indian Basketball Day’ festivities, two exhibition All Star matches were played that featured the top men and women players in the country. A Slam Dunk contest was also held for the high-fliers in the men’s division which was won by Amjyot Singh from Indian Overseas Bank (IOB), Tamil Nadu. Amjyot, of course, is famous for another dunk earlier this year against China that capped off India's historic win over China at the FIBA Asia Cup.