Continuing the momentum gained from winning India's biggest domestic basketball tournament - the Senior Nationals in Rajasthan - players for Chhattisgarh (Women) and ONGC (Men ) rose above their opponents to be crowned champions at the 10th Savio Cup invitational basketball tournament in Mumbai. One of the top club/state basketball championships in India, this year's Savio Cup was once again held at the Don Boscho school in Matunga from January 11-18. The Women's and Men's finals were held in front of an eager, hoops-loving crowd on Sunday, January 18th. 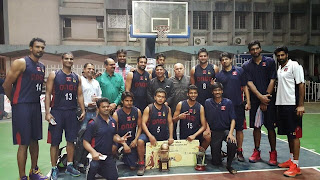 ONGC - the Men's club side featuring several of the same players who won the Senior National Championship in Bhilwara (Rajasthan) a few weeks ago - returned to the Savio Cup as the reigning champs with hopes to lift the title again. In the tournament's finale, ONGC faced their familiar rivals IOB (Chennai), whom they had defeated in the final last year as well as trumped over earlier in this year's tournament. With tournament MVP Vishesh Bhriguvanshi leading the way, ONGC once again got the better of their foes. ONGC started with a 19-5 run in the first quarter and held on to their advantage till the end for a 63-53 victory.

The women's final brought out the top stars in the country in a clash of 2014 Savio Cup winners Southern Railway and the winners of the last two Senior National Championships, Chhattisgarh. Railway started the game on top, racing up to a 33-29 lead. But Chhattisgarh bounced back with a strong performance in the third quarter to go up by five before the start of the final period. The gold remained in touching distance for both squads, but it was eventually Chhattisgarh who provided another clutch performance to stamp their mark over Indian Women's hoops with a title-clinching, 71-63 victory.