When 16 of the best university basketball teams in India gather together on the same court, fireworks are guaranteed. And for the past week in Chennai, fireworks were delivered. The UBA All India Inter University Basketball Tournament for Men was held at the Sathyabama University in Chennai from January 12-19 as the conclusion of the world's largest combined basketball tournament . The national final was an 'All Chennai' affair, as hosts Sathyabama faced off against local rivals Madras University on Monday. Madras University that emerged as national university champions with an inspired 81-64 victory. 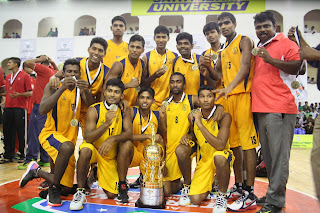 The Universal Basketball Alliance of India (UBA) has acquired the broadcast, merchandise and sponsorship rights to the existing, and self-governing Indian University Basketball Program of the Association of Indian Universities (AIU). The UBA worked on securing television broadcasting arrangements, corporate sponsorships for tournament play, and creating merchandising opportunities at the tournament. They have focused their attention on the AIU and popularizing its All India Inter Zonal Tournament in the same manner as the Collegiate Basketball in the USA. In their first year as organizers of the tournament, the UBA invited star former Indian athlete Anju Bobby George, former NBA All Star Cedric Ceballos and Bollywood star Abhishek Bachchan as special guests.

Four teams that finished tops in each of the North, South, East, and West Zones in India were invited to this tournament to compete for the national crown.

The battle of the Chennai city rivals at the final on Monday was a rematch of the South Zone championships finale, where Sathyabama had defeated Madras University just ten days earlier. Satyhabama seemed on course for another victory after they got off to a blistering 13-2 start to begin the game. But Madras University turned the corner after a quick timeout to get on top and hold on to a slim four-point lead at halftime. Behind the dominant post play of Jeevanatham P. (26 points, 10 rebounds) and forward N Nagaraj (20 points, 14 rebounds), Madras took complete control of the second half and raced to a 81-64 win. Anto Bethle added 19 for the winning side. Satyhabama were led by Arun Prashanth (19) and Rakesh (17 points, 16 rebounds) in the loss. 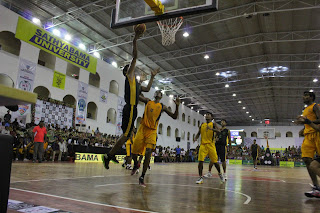 Earlier in the day, the bronze medal game was an offensive explosive between Jain University (Bengaluru) and Bharati Vidyapeeth University (Pune). Kapil Gaikwad, representing the Pune side, scored 48 points to lead all high scorers as Bharati had an 16-point lead earlier in the game. But Jain's 'Big Three' of Kaif Zia (36 points 14 rebounds), Yashas R. (31), and Vinoth (25) sparked an inspired second-half comeback to help their team win 123-115 in the entertaining clash. Bharati's Akshay Bhosle also scored 36 for his team in the loss.

Bollywood actor and basketball enthusiast Abhishek Bachchan was the chief guest at the final and handed over the trophies and medals to the teams. On the occasion, he said “Basketball is growing rapidly and is going to be the biggest sport in this country. The Universal Basketball Alliance will continue to have my full support in this great initiative to promote basketball in India.”

Former NBA All Star and slam dunk champion Cedric Ceballos was also a guest at the opening of the tournament along with star Indian athlete Anju Bobby George. Ceballos, who played 11 years in the NBA with memorable stints at the Phoenix Suns and the Los Angeles Lakers, was also a judge at the UBA national championship's dunk contest.

This Inter-Zonal All-India University Annual Tournament is the most comprehensive on the planet, as it encompasses nearly 10,000 colleges. “It is an honour to be here,” said Ceballos at the opening ceremopny. “This is a challenge for passion, this is a challenge for teamwork, and it is also an opportunity for dreams to come true.”
Posted by KARAN MADHOK at 08:26