For years, India's top university teams nationwide have been taking part in our own homegrown version of the NCAA National Basketball Tournament, pitting the best college-level players against each other to crown the national champion. But this year, the tournament is set to take a major boost forward to catch the imagination of players and fans around the country. The Association of Indian Universities's (AIU) Annual Men’s National Basketball Championship is a largest university-level pan-India basketball tournament, with the winning team boasting of the title of the best university basketball team in the country. This year, the tournament is set to be held at the Sathyabama University in Chennai from January 12 - 19.

After finishing in the top four of their respective zonal tournaments, 16 top teams from four different Indian zones have qualified for the National tournament.

A highlight of the tournament will be the special guest, former NBA All Star and Slam Dunk champion Cedrid Ceballos. Ceballos played in the NBA from 1990-2001, suiting up for the Phoenix Suns, Los Angeles Lakers, Dallas Mavericks, Detroit Pistons, and Miami Heat in the process. As a member of the Suns, Ceballos won the Slam Dunk contest in 1992 with his famous 'blindfold dunk'. The following year, the small forward led the NBA in field-goal percentage and reached the NBA Finals. His best overall individual years came as a Laker, when he was named to the All Star team in 1995 (but couldn't participate due to injury) and averaged 21.2 points per game. Post his NBA career, Ceballos played for basketball leagues in Israel, Russia, and the Philippines.

The Universal Basketball Alliance of India (UBA) has acquired the broadcast, merchandise and sponsorship rights to the existing, and self-governing Indian University Basketball Program. The UBA is currently securing television broadcasting arrangements, securing corporate sponsorships for tournament play, and creating merchandising opportunities. UBA will focus its attention on the AIU and popularizing its All India Inter Zonal Tournament in the same manner as the Collegiate Basketball in the USA. 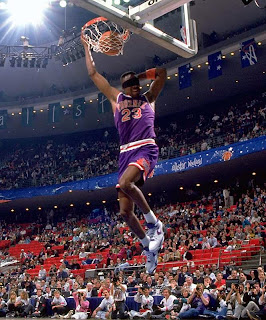 The qualified teams for the national tournament are:
The winners of their respective zones - Sathyabama (who are also the hosts), Punjab University, MGKV, and Bharati Vidyapeeth - will of course start as favourites to win the national crown. Last year's champions in Varanasi, Hindustan University from Chennai, are missing from action this year. Talented squads from Guru Nanak Dev University and Jain University will also be hoping to take a step forward this year.

Ceballos will be at the Sathyabama University in Chennai to judge the slam dunk contest and attend other events. Quick 5-rupee bet that one of the dunkers busts out a blindfold dunk attempt to try and impress the illustrious judge.