For eight days, the best of Indian basketball was at Bhilwara (Rajasthan), welcoming the new year with the nation's biggest domestic hoops competition. The city played host to the 65th National Basketball Championship for Men and Women from December 29 - January 5. And after a combined 51 teams in the Men's and Women's sections displayed the top basketball talent in India from across the various states, units, and territories, two champions stood atop the podium at the very end. In the Women's section, Chhattisgarh repeated after last year's surprise win to once again win the gold. In the Men's tournament, 2013 champions Uttarakhand bounced back to reclaim their place at the top. 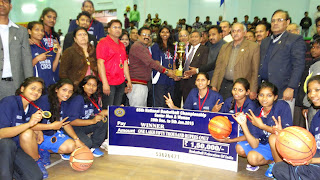 Organised by the Bhilwara District Basketball Association in collaboration with the Rajasthan State Basketball Association under the aegis of Basketball Federation of India (BFI) and IMG-Reliance, the 'Senior Nationals' tipped off last week with some of India's top players looking to make a mark and bring home a trophy for their squads. After eight days of mesmerizing action, the tournament came to an end with the Men's and Women's finals at Bhilwara on Monday, January 6th.

A year after shocking Indian Railways in the final to win the 64th National Championship, Chhattisgarh found themselves in the Women's finale again, once more after defeating Railways at an earlier stage. Their opponent this time around were the experienced Delhi team, who returned to the final after a three-year gap. While Delhi were competitive earlier in the game, Chhattisgarh superstar Poonam Chaturvedi - India's tallest Women's basketball player at 6-foot-9 - continued her dominant run at the tournament with one of her finest individual performances. Chaturvedi let loose for 48 points to go with 12 rebounds for Chhattisgarh, helping her side blow out Delhi in the third quarter and hold on to their lead for a 84-75 win. Delhi lost the services of former Indian captain Prashanti Singh to injury earlier in the game. Sharanjeet Kaur added 18 for Chhattisgarh in the victory.

Chaturvedi was named the tournament's MVP after averaging around 30 points per game and rounded up her second national title in two years. This feat is even more amazing considering that she was diagnosed with brain tumour last year and battled back to regain her spot as one of the finest players in the country again. Another incredible fact? She is still just 19! 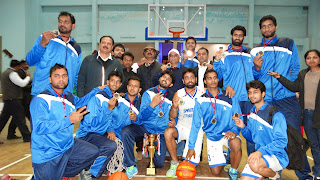 The Men's final pitted the winners of the last two years - Tamil Nadu and Uttarakhand - against each other for an exciting battle of supremacy. The game also pitted two of India's finest big men and national team frontcourt teammates Amrit Pal Singh (Uttarakhand) and Amjyot Singh (TN) against each other, albeit Amjyot didn't play until the second half due to an ankle injury. It was the 2013 champs Uttarakhand who got off to a hot start, leading by 10 at the end of the first quarter and maintaining a double digit lead at halftime. With the help of Amjyot, TN attempted a second half comeback, but it wasn't enough as Uttarakhand held on to finish the game with a 72-63 win and the national title. Amrit Pal continued his fine form in the final, leading all scorers with 27 points and 14 rebounds. His teammate Yadwinder Singh added 16 to help Uttarakhand finish with a flourish.

Amrit Pal Singh was handed the MVP award in the Men's division.

Indian Railways Women had to settle for the bronze medal this year after a closely-fought 81-76 victory over Kerala in the Third/Fourth place matchup. Led by Smruthi Radhakrishnan (16) Railways were challenged till the very end by a talented young Kerala squad, which featured the likes of Poojamol KS (18) and Neenumol PS (16) leading the way. In the Men's bronze-medal game, India's national team starters Joginder Singh (22) and Narender Grewal (21) led the way to defeat the surprise team from Haryana, 87-70. After a wonderful run in the tournament, Haryana had to settle for fourth place, but not before their top scorers Deepak Rathee (23), Himanshu S (20), and Hemant S (20) gave Services a true run for their money. 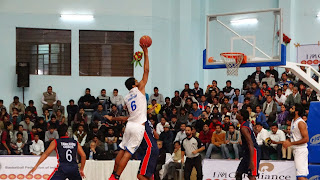 At the semi-final stage a day earlier, Indian Railways Women had an opportunity to avenge last year's semi-final loss to Chhattisgarh. Despite a valiant effort by Railways' R Rajapriyadarshini (35 points, 16 rebounds), Railways came up short at the end of another classic encounter between the two sides. Behind Poonam Chaturvedi efforts (27 points, 13 rebounds), Chhattisgarh raced to a 12-point lead at halftime. But Rajapriyadarshini and Anju Lakra (20) led Railways all the way back in the third and fourth periods to a small lead. Unfortunately for them, Railways weren't able to hold on, and Chhattisgarh used a last valiant push to run past them for a 83-79 win. Sharanjeet Kaur aided Chaturvedi's monster night with 16 points in the win. Meanwhile, Delhi Women relied on the services of Pratima Singh (17) to break lose from a low-scoring start en route to a 71-63 win over Kerala. Jeena PS led Kerala with 18 points and 12 rebounds in the loss.

In the first Men's semi-final, Uttarakhand ended Haryana's Cinderella run in style, using their experience and deep pool of talent to post a 86-64 win. Veteran international star Vishesh Bhriguvanshi led with 26 points and 10 rebounds for Uttarakhand while his international teammate Amrit Pal Singh added 16 and 13. Former international player Riyazuddin added 18 for Uttarakhand in the victory. Haryana's leading scorer was Himanshu S (19). In the second Men's final final, Amjyot Singh was in his finest form for TN, lighting up the night with 29 points and 13 rebounds in the 86-73 win for his side over Services. TN's A Aravind also added 22. For Services, Narender Grewal left it all on the line with 29 points and 11 rebounds in the loss. 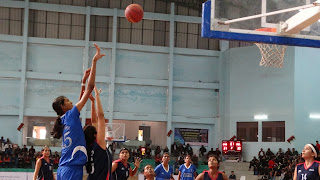 A day before the launch of the championship, the BFI celebrated 'Indian Basketball Day' in honour of late CEO Harish Sharma. On this day, the best players in the country took part in Men and Women's All Star games and a Slam Dunk contest. Cultural performances, prize distribution, and a remembrance ceremony for Sharma was also held.