If you were an attendee in any of the major national basketball championships across India, it's likely that you may have run across Cathy Scholl. And from Chennai and Mumbai to Ludhiana and Delhi, if you hadn't seen her in person, you would have surely found her online. You would've seen her wonderful photographs capturing an entire mosaic of emotions in Indian hoops in a single, static image. You would've been introduced to her work via social media. You would've seen banners of Indian players in actions at major stadiums in the country, and even if you didn't recognize the photographer, you would've surely known the photograph. 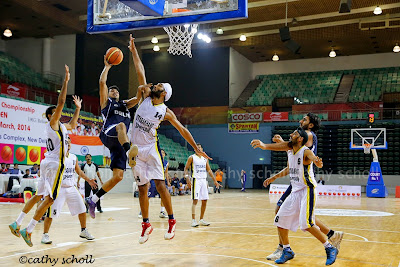 Since visiting and photographing the 2011 Indian national basketball championship in Chennai, Scholl has visited various hoops events across the country and introduced some much-needed professionalism and quality into the photography of the sport. Her work was also recently featured in TIME Magazine's photo-essay on the rise of Indian basketball. In India, Scholl's photographs have been used as banners at the Guru Nanak Stadium in Ludhiana to showcase the success of the Punjab home team. On social media, she continues to promote more of her work through her 'Desi Hoops' page, filling in a much-needed void of consistent photography work in the game.

Born in Wisconsin, USA, it was a strange and extraordinary journey that eventually landed the former talent manager to India. Scholl's passions for dance and music introduced her to Indian arts and culture, and it was her interest in Indian spirituality that served her first visit to the country. Inspired by HWL Poonja, Scholl visited India for the first time to Lucknow. And then, the visits never stopped, as for the next two decades she continued to take trips to India, usually staying at Ramana Maharshi's ashram in Tiruvannamalai. "Although I was sitting with eyes closed in mountain caves and meditation halls my childhood interest in photography was rekindled by the gorgeous colors of the women devotees' saris," she said. 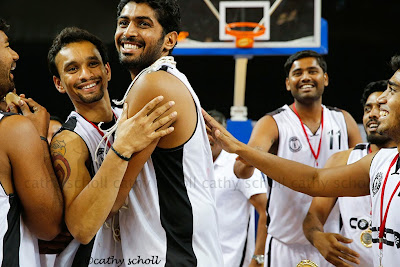 India - with its myriad of colours, cultures, topographies, religions, and the diversity of people - is a photographer's paradise. But it took a different kind of inspiration for Scholl to zone in to the Indian basketball world. Back in California, she learnt about the story of the SEEDS Academy in Senegal, an institution to help the best young basketball players in the country. Scholl wanted to explore similar basketball programmes in India, and her research opened her doors to the JDBasketball Academy and a world of desi hoops through this Hoopistani blog. During a visit to an ashram in Tiruvannamalai, she decided to also head out to Chennai nearby to experience the Senior Nationals three years ago.

"When I walked into the stadium in Chennai I was instantly hooked," said Scholl, "I saw the passion of the players and the potential for growth of the sport. I love stories about globalization and cultural identity and this has both...an American sport mixed with the culture of India."

Ever since that first 'hook', Scholl hasn't let go, and basketball in India has taken her to several places and opened her eyes to many interesting experiences. Scholl particularly recalls her experiences of meeting and photographing the legendary coach S. Subramanian of the Ludhiana Basketball Academy not long before his death. 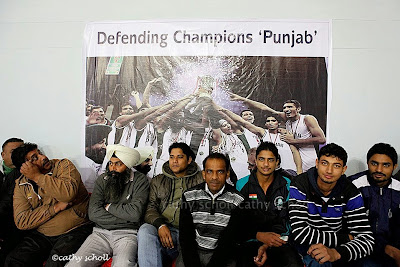 "I was happy to have met legendary coach Dr. S. Subramanian several times," she said, "In Ludhiana, I suggested we take a photo of him with all of his students, past and present. We were never able to get everyone together in one place but I was very happy to have photographed him with Satnam Singh Bharama and some of his (at the time current) students in Ludhiana."

Also in Ludhiana, Scholl recalled her surprise when she saw one of her Punjab championship photographs proudly displayed at the Guru Nanak Stadium in the city. "When I walked into the Stadium I was shocked to see my photograph from Chennai of the victorious Punjab team hanging as a giant banner next to photos of former champions. I immediately felt right at home with my picture hanging on the wall. It also confirmed that there was a need for my work and that I was helping to record Indian basketball history."

In her time, Scholl has been able to cultivate several close bonds with the basketball community in India, and says that her dream is to eventually use her background as a talent agent to get India's top players the representation they deserve, something that is sorely lacking in the nation right now. For the last few years, she has met several sports agents in India, and although none were representing basketball players, there were many who showed interest. Once the Indian professional basketball league begins, she believes that the opportunities for representation of Indian players will present themselves, and Scholl hopes to be involved in the process, too. 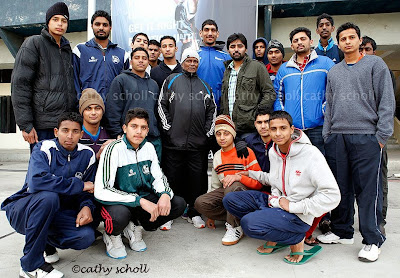 Indian basketball has grown steadily since Scholl first decided to explore it. Since then, there has been more professionalism in Indian national events, better results for the national teams, the launch of revamped school and college leagues, and the hopes of a future pro league. With a camera in her hand and with the hopes to catch the revolution one frame at a time, Scholl remains optimistic for the future.

"For the future, I feel a combination of excitement and frustration, just like everyone else," she said, "But I think that ultimately it will all happen... There will be a Professional league, an Indian NBA player, the level of play will rise, and many Indian players will be attending high school and college in America similar to my African friends. It's just a question of when. I hope it all happens sooner rather than later, especially so that the current players can receive some of the financial benefits that are sure to come." 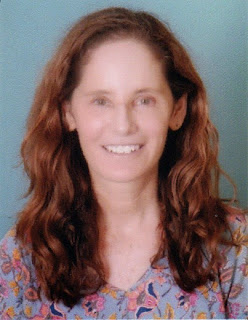 All images above provided for this article are from Cathy Scholl's collection of Desi Hoops photography around India, used with her permission. You can check out more of her work on her website http://cathyscholl.com/ or her Facebook page Desi Hoops-Indian Basketball photography by Cathy Scholl.