With a victory over rivals Japan in the final, the Chinese eves completed a three-peat of titles at the FIBA Asia U18 Championship for Women in Amman (Jordan) on Friday, October 17th. This was China's 14th overall title in the 22nd edition of the tournament as they continued to be the driving force in junior Asian women's basketball. 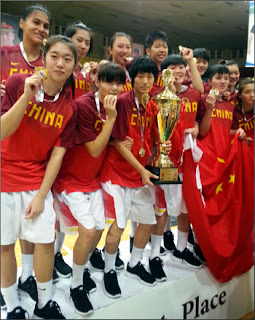 India, who played in the tougher Level I of the tournament, lost all their preliminary group games but won the crucial Level I qualifier to remain in the higher fray of the competition for 2016.

China got off to a fast start against Japan in the Final, racing to a comfortable 17-point lead by halftime. The undefeated Chinese women had been the only squad to beat Japan earlier in the group stage, and once again were in cruise control in the tournament's finale. Japan played much-improved basketball after the halftime break, but it was too little too late as China held on to their lead for a 60-53 win.

A closer contest was played earlier on the final day in the fight for the bronze medal between South Korea and Chinese Taipei. Korea's Ji Su Park (20 points, 21 rebounds) and Taipei's Yi-Wen Yu (20 points) went head to head as the two teams stayed on each other's heels every step of the way. The game was finally decided in a low-scoring final period when South Korea inched away to a 57-54 win. 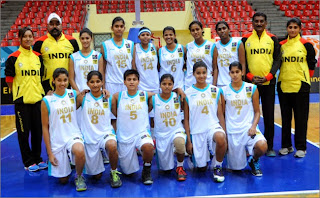 A day earlier, Japan were led by Nao Sogabe's 17 points as they got off to an early 16 point lead and pranced away to a 83-50 win over Korea in the semi-final. Ji Su Park had a game-high 19 for Korea in the losing effort. The second girls' semi-final between China and Chinese Taipei started off as a closer affair, as China led by just five at halftime. But an improved performance after halftime and an explosive final period saw China race away to an eventually comfortable 80-52 win. Si Jing Huang led the way for China with 23 points and nine rebounds while Shuai Liu added 19 and seven off the bench.

Team India - led by Coach PC Anthony - featured a roster of 12 young up-and-comers hungry to make a mark at the junior stage and prove that they had the talents to be selected at the senior level. Because they had finished among the top six in the continent, India were selected to play in the tougher Level I of the competition, along with China, Chinese Taipei, Japan, South Korea, and Thailand.

It was baptism by fire for the Indians, who were humbled by the mighty Chinese in their very first game. Relying on an explosive offense and equally stingy defense, China raced to a huge 34-7 lead after just the first quarter. India were outscored by double digits in the second quarter too and faced an insurmountable 38 point deficit at halftime. China eased their pace after halftime, allowing India to perform a little better, but the result was never in doubt. Led by Dilishati Dilana (19), Jin Bo Xing (17 points, 13 rebounds), and Si Jing Huang (17 points, 10 rebounds), China cruised to a 124-72 win. India's bright sparks were the performances by Shruti Menon (25) and Sangeeta Kaur (21) in the loss. 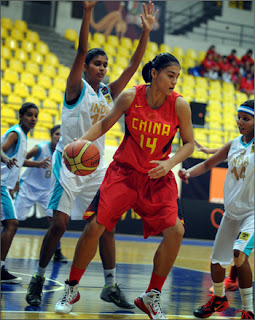 India got no respite the next day against Chinese Taipei. Once again, the Indians were down big - 34-15 - after just the first period. In a game that began to mirror the previous day's loss, Chinese Taipei dominated on all ends of the floor and blew India out en route to a 111-70 win. Taipei's top performers were Chia-Chieh Li (25) and You-Jing Zhang (17 points, 15 rebounds). For India, Poojamol Kochuparambu impressed with a 20 point outing.

India played their worst offensive game of the tournament in the game against eventual silver-medalists Japan. Mamiko Tanaka led the way with 25 points and seven rebounds for the Japanese who put the clamps on India, allowing just 27 percent shooting from the floor all game. India found themselves down 66-28 at halftime and seemed to have thrown in the towel in the game's final two quarters, eventually ending the night with a 107-47 loss.

India's first real opportunity for a victory came against Thailand, the only Level I squad that closely matched their standing among the Asian opponents in the group. India started off determined to pick up their first victory of the tournament, and in a neck-to-neck contest, held a two point lead at halftime. But it was a game-changing third quarter by Thailand that put them back in the driver's seat, and India failed to make a comeback in the fourth. By the final buzzer, Thailand had held on for a 68-62 victory led by Amphawa Thuamon (20 points, 11 rebounds, seven assists). Poojamol was once more India's bright spark, leading the team with 17. 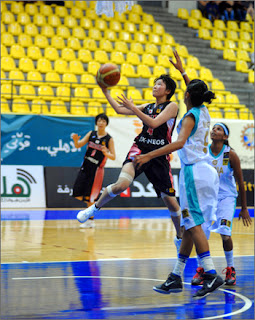 India's final preliminary round game was against Korea, and this time, they seemed determined to put the past performances behind them. A hot start by both teams saw Korea leading 29-26 after the first quarter. India trailed but had managed to put in their best stretch of play in the tournament so far. But Korea began to find a better defensive rhythm in the second and third quarters, and extended their lead to a comfortable 69-50 after three periods. India attempted a strong comeback in the fourth, but the damage had already been done and Korea secured a 90-77 win. Korea's dominant Center Ji Su Park finished the night with 16 points and 18 rebounds. For India, the aggressive backcourt of Poojamol (25) and Barkha Sonkar (24) scored nearly two-thirds of the team's points together.

India had finished the group stage with five losses in five games, and their only opportunity for redemption was to make sure that they secured their status as a Level I team. They were challenged by Level II winners Malaysia in their last game of the tournament for this status, and India started off the game in no mood for mistakes. A dominating first half had India sitting comfortably up 41-26 at halftime. Malaysia turned their fortunes around in the second half and made a valiant comeback, but time would not be on their side and India eventually survived for a 81-76 win. Poojamol was India's star again and scored 29 points in the win. For Malaysia, the top performer was Chia Qian Tai (25).

India ended the tournament with a 1-5 record at sixth place, but managed to retain their Level I status. 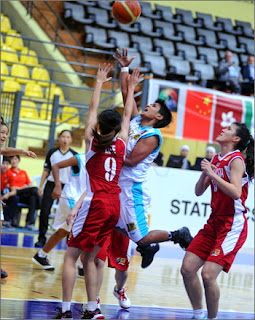 Overall, the performances by India's junior girls were highly disappointing. While fans had been hoping for India to catch up to best in the continent, it seemed that the gulf had been stretched even wider. India lost their games to the 'Big Four' of China-Chinese Taipei-Korea-Japan by an average of over 41 points each, with only their final performance against Korea showing a hint of fight. The biggest disappointment was the loss to Thailand, a team that India must start defeating on a regular basis to truly take the jump up to the next level.

A positive was the performance of rising young star Poojamol Kochuparambu from Kerala, who was India's leading scorer through the course of the tournament. Poojamol has been dominating at the domestic level for years and is primed to become a big star for India's senior national squad in the future. Poojamol's backcourt mate Barkha Sonkar - who is currently training at the IMG Academy in Florida - is a highly capable point guard and is also a sure shot to become a regular in the senior side in the future.