The Cult of Kobe: In China, the Lakers' Superstar is more myth than man The referee called foul and the player stepped on to the free-throw line. The chant broke out from the majority of 17,000 NBA devotees packed inside the MasterCard Center in Beijing, China, watching the Lakers play the Warriors in the first of their two pre-season exhibition games in the country, on October 15th. Fans had flocked the arena in jerseys and presumed allegiances to both teams, but when it came down to it, attendees in both Laker and Warrior jerseys started chanting Kobe’s name.

The only problem was, Kobe wasn’t the player shooting the free throws. He wasn’t even on court. He wasn’t dressed for the game at all. He sat on the bench amongst the assistant coaches in a business suit, still nursing his healing Achilles tendon. The chants continued nevertheless, in a vain attempt to perhaps see him change into Laker gear and step on court, or simply acknowledge their existence, or maybe just see his face flashed once more on the jumbotron.

The chants continue, whether it’s Pau Gasol or David Lee or Stephen Curry or Steve Blake on the free throw line. They continue during the timeout, they continue at the halftime break, and they continue well after the game ends and the players exit to the locker rooms. 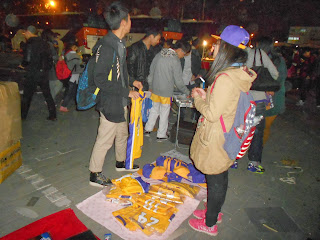 Outside the arena, following a 100-95 Warriors win, Beijing briefly turns into bizzaro Downtown LA. Kobe jerseys, T-shirts, hats, mouse pads, iPhone covers, bags, scarves, and pretty much anything else that could possibly be merchandized are being hawked. The subways are full of fans of all ages in Kobe jerseys. The NBA may have held the game at a neutral venue, but with the Mamba on deck, the Lakers were  always going to be the home team.

Such is the impact in China of the cult of Kobe. While Bryant has collected championship rings, All Star accolades, an MVP award, and legendary status back home in America over the course of his 17-year-career, he has also been able to cultivate a unique following in the world’s most populous country. In China, Kobe has developed into more than a man. He’s a myth. He’s spoken of in reverence, and alluded to like a demi-god.

There was that time when he dunked on the Great Wall of China. 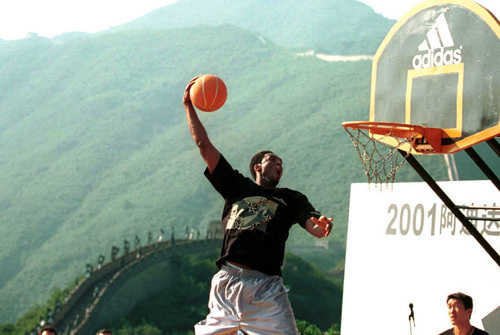 The time when he scored 68 points in 15 minutes at a celebrity game.

There is that statue of him in the city of Guangzhou.

There was the time when he had 15,000 fans waiting for him at a venue at 9 in the morning, in line for his scheduled appearance at 4 in the afternoon.

And the time when the Asia Society celebrated him as a Cultural Ambassador to China and others referred to him as a “one-man State department, reaching directly to the people.”

For a country that has long thrived on the socialist philosophies of ‘we’ rather than ‘I’, China have a complicated history with personality cults, starting with the Supreme Commander himself. With changing times, a new type of celebrity obsession has hit the Chinese youth, and everyone from Rihanna to Justin Bieber to David Beckham draw colossal numbers of screaming fans with their every move.

Basketball has long been one of the favourite sports, and with the success of Yao Ming, the NBA has become by far the most popular sporting league in China. Yao is considered one of the country’s greatest ambassadors and is a role model for many, but now that he’s settled back in China, his presence isn’t as novel as it once used to be. Amongst current NBA-ers, LeBron James has dominated Chinese social media (renren, sina weibo, tencent weibo, youko, etc.) more than any other Western celebrity over the past year. Tracy McGrady attracted big crowds in every Chinese small town where he CBA team visited last season, and was even welcomed by 2,000 screaming fans when he first landed at the Qingdao airport. Derrick Rose, Kevin Durant, and of course, Jeremy Lin are a big deal here, too.

But nothing matches the strange and wonderful veneration of Kobe. It started in the last 90s, when a young Kobe began to host basketball camps around China. The mainstream popularity of the NBA in the country synchronized with the Shaq-Kobe three-peat, and by the time Yao became an NBA mainstay superstar, Kobe was hitting game-winners on the regular and scoring in the 40s, 50s, 60s, and 80s.

By the time he had won his fifth championship, the legend of Kobe in China was sealed. Mamba was visiting the country nearly every off-season and visiting smaller off-beat towns to get closer to more and more hardcore fans. He was part of the US Olympic Basketball squad that won the 2008 gold medal in Beijing, and in front of the crowd at the same MasterCard center, it was Kobe that memorably stepped up as the brightest star in a team full of superstars to defeat Spain in the Final. On the side, he became involved with charity projects and set up the Kobe Bryant China Fund, which ended up raising millions to help those affected by natural disasters in the country.

Judy Seto, a trusted physical therapist of Bryant, reveals many of the strangest stories about Kobe’s popularity in China, and she adds that, “He’s made an effort to cultivate that relationship [with China] every year. And it’s not just, ‘Let me make this stop at this store.’ It’s, ‘Let me hold this clinic to work with some of the kids and spend some time with them. Let me understand what this city has in terms of culture or the main manufacturing or what’s the main draw.’”

Before the Lakers-Warriors exhibition in Beijing, NBA Commissioner David Stern tried to explain the Kobe phenomenon in China. “Well first of all, he’s playing for the Lakers,” Stern said, “He’s been playing for a very long time, as viewership and interest in our game has grown dramatically. And he has come to this country quite often and understands what it is to cultivate a fan base which totally understands that he has, shall I say, the heart of a champion. His Chinese fans totally expect him, beyond all odds, to make a full recovery from his injury because they have come to have enormous confidence in his ability and his determination. I think that’s because he’s shown the ability and determination at different stages of his career to win, to play at his highest and to elevate his teammates.” 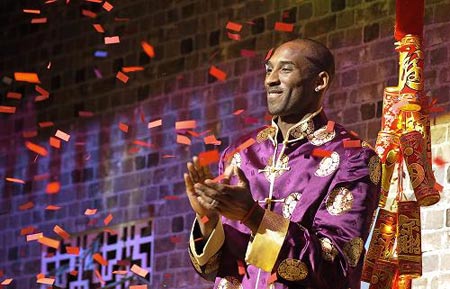 Bryant, however, slightly deflects the answer from himself when speaking on his own popularity. "If you go back to the States, fans have gone through this progression of hero marketing,” he told Mike Bresnahan of LA Times, “They kind of lived through that in the '80s with Michael [Jordan] and Magic [Johnson] and having the fanaticism of fans. With so many [U.S.] media outlets, I think it's evolved to something beyond that, where we're a little bit more desensitized by celebrities. Out here, not so much. It's something that's kind of relatively new.”

In recent years, the two championships for the Miami Heat, coupled with the forgettable years for the Lakers, have boosted LeBron’s popularity amongst the newer, younger NBA fans, many of whom are more active on Chinese social media. China likes winners, and yet, despite the fact that Kobe’s last meaningful playoff game came over three years ago, fans have remained loyal to him. Regardless of the problems of the present – the injury, the age, and the declining roster – the Myth of Kobe is secured. “China likes him because he is always working so hard, and he always wants to win,” describes Sun Yimeng, an editor and writer for SLAM China and one of the most famous Kobe fans in China, “I have seen grown men crying in his presence because he inspires them so much.” She also tells the story of a fan – one of many – who bought a Mercedes-Benz ‘Smart Car’ simply to put his name into a lottery of those (in the thousands) with a chance to meet Kobe. “Luckily for him,” she adds, “He won!”

The love for Kobe reached its peak in the player’s darkest on-court moment. When Kobe went down with the Achilles injury to the Warriors at the end of last season, Weibo – China’s version of Twitter – erupted with good-will messages for Bryant. Kobe, who has over 2.3 million followers on Weibo, posted a photograph of himself preparing for surgery on his account. Within 24 hours, the photo had accumulated 45,000 comments and forwarded over 70,000 times. ‘Pray for Kobe’ and ‘God Bless Kobe’ became amongst the most popular trending topics in the country, and fans didn’t hold back with their emotional outpouring of their favourite Kobe memories, their wishes, and their determination to believe that Bryant would be back to his best again. (Jason Q. Ng compiled a fascinating, long list of Weibo comments for Kobe post his injury).

Outside the borders of Mainland China, down to Hong Kong, eastwards to Taiwan, and then around in other Asian nations who are slowly falling deeper in love with the NBA, the Kobe mania continues. In Taiwan, Kobe is in commercials with the country’s most popular entertainer Jay Chou. In the Philippines, the crowd at the recent Rockets-Pacers exhibition game chanted Kobe’s name at his former Laker teammate Dwight Howard. In India, where basketball is still a minor sport, fans on Facebook ran a petition to try and get Kobe to visit the country.

While Kobe – and LeBron, too – are the dominant NBA personalities amongst most of China and Asia in the present, there is a special place still saved for the man who was once bigger than the sport of basketball itself. In China, legions of followers still swear by the gospel of Michael Jordan, and to many of Asia, interest in the NBA is still stuck in a 90s time-warp. According to the Financial Review, back in 1992 during MJ’s heyday, a survey taken by students in China revealed that Jordan was considered the most influential person of the twentieth century.

Jordan made way for Iverson, Iverson for Yao and McGrady, and then, to the new era of LeBron, with Rose and Durant and others. And then there’s Kobe, who has survived all the post-Jordan eras and maintained his popularity and relevance in world basketball.

The venue now is Shanghai, and it’s the second of two China preseason games on October 18th at the Mercedes-Benz Arena. A loud cheer greets Shanghai’s proudest son – Yao Ming – who waved at the fans in attendance. An even louder cheer was saved for Kobe Bryant, who via Philadelphia to Italy to Los Angeles become a legend to a country of hundreds of millions of basketball fans.

Bryant didn’t play in either game in China. The Lakers lost both games. But it didn’t matter. Fans screamed. Fans cried. He was mobbed everywhere he went. Some got to see him in person. Some saw on him on the jumbotron. Some watched him with pride on the Television, excited that he was back in their country. And others sent him messages online.

The chants never stopped. And the cult of Kobe continued.