A little over a month ago, the NBA and Reliance Foundation announced a multiyear partnership to launch a comprehensive school-based youth basketball strategy for India: the Reliance Foundation Jr. NBA programme. As part of this programme, a three-day workshop was held at the Rajagiri School in Kalamassery, Kerala, which was attended by 140 Physical Education teachers from around the state. 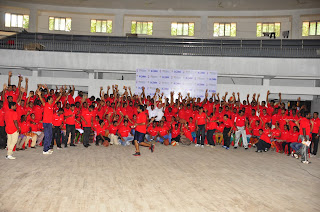 The PE Teachers were trained by Troy Justice, Senior Director Operations International of NBA in India, along with Australian coach Adrain Newell.

The first year of the Reliance Foundation Jr. NBA Programme in Kerala will operate in more than 100 schools in the districts of Ernakululum, Kottayam, Alappuzha, and parts of Thrissur and Pathanamthitta from Nov 20th to January 8th. 5 international coaches have been recruited for this programme by the NBA and Reliance. Along with them, assistant coaches recruited locally and the trained PE teachers will conduct daily basketball-led physical education classes for grades 4-10 in their schools.

In addition to the in-school portion, select schools will make their courts available four days per week for after-school basketball programsmes comprised of more advanced training and individual skills and team-based competitions. These will include 3x3 and 5x5 competitions, and the top players and teams from each school will be selected to compete in a citywide competition.