The Basketball Federation of India (BFI) has announced the 12-member roster of girls that will represent India at the 3rd FIBA Asia U16 Championship for Women, set to be held in Colombo (Sri Lanka) from November 23-30, 2013. India has finished at 5th place at the 2011 championship in Jinan (China) and will start from Level 1 of the tournament this year, along with China, Korea, Japan, Chinese Taipei, and Malaysia. 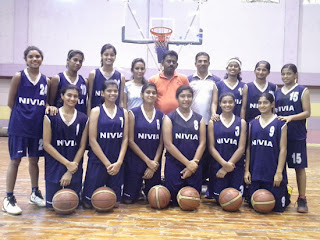 The team is currently undergoing their second training camp at SAI, NSWC Gandhinagar in Gujarat. Their first training camp was held at SAI Aurangabad, Maharashtra from August 10 - September 23. The team is now set to head to the CBA Basketball School in Dongguan, China, for a training camp from November 13-21st in preparation for the U16 FIBA Women's ABC.

"I think the Indian National U16 Girls Basketball Team has some talented players," said Garcia, "We need to focus on the overall development of these players. The goal is to train them harder to join the Senior team in the future. This exposure trip to China will help them to play matches under pressure, which will be key to their development. We expect them to give 100 percent and try to get the best results in the Championship."