Shooting Star: Stephen Curry is ready to turn the long-shot Warriors into contenders


Excerpts of this feature were first published in the 118th edition (2013 - No. 21) of SLAM China Magazine. Here is my complete and original English version of the story.

“It’s my first time playing in China. I want to give the fans a show.” 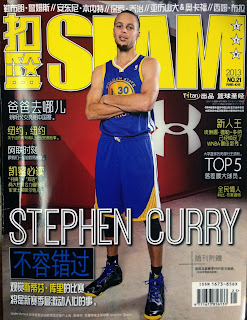 On the eve of the pre-season exhibition game between the Warriors and the Lakers in Beijing, Stephen Curry made his intent clear. Basketball was officially on the agenda, but whenever the league’s most promising young sharp-shooter takes the stage, it becomes more than a game. It becomes a show.

The next night, the show began slowly for Curry. It was – technically – ‘just’ an exhibition. Teammate David Lee did most of the damage for his side, scoring a game-high 31 points and keeping the Warriors in contention. The Lakers came fired up and led by 11 points after three quarters.

In the midst of this, Curry’s pregame proclamation – and his potential influence on the game – were mostly forgotten. The eyes of the crowd were transfixed instead on Kobe Bryant, who, while nursing his Achilles tendon, hadn’t even suited for this game. The crowd chanted Kobe’s name at every opportunity, and the game’s biggest star became the man who wasn’t even participating in it.

A good point guard has to do a lot of things. He has to be a great passer, has to have a strong handle on the ball, has to defend the perimeter, has to penetrate, has to be creative, and has to convert his open looks.

A great point guard has to do all of those things – and be the leader of the squad.

A day before the Beijing game, Warriors’ Coach Mark Jackson, one of the most respected point guards of his era, had made it clear that his starting point guard – Curry – was now ready to follow in his footsteps. “He’s a leader, a great basketball player, and an All Time great shooter, and he’s coming off of an outstanding season,” Jackson said, “He’s done a great job in being one of the captains and leaders for this team. I’m excited about what the future holds for Steph Curry.”

Curry’s own experiences with a point-guard as Coach seem to have benefitted him, and he told SLAM that he was lucky to have Mark Jackson at the helm.

“I have a special relationship with coach,” Curry said, “He played the same position that I’m at right now. I definitely learn a lot from him every single day and he instills a lot of confidence in me to go there and play well.”

Ending last season with a memorable playoffs run definitely raised interest amongst basketball fans around the world for Curry and his young Warriors. In Beijing too, although the Lakers and Kobe are definitely the crowd darlings, there were enough Golden State and Curry fans to make their voices heard.

While the Warriors trail for most of the game, Curry begins to show flashes of the leadership that he has been promising. He has only 10 points at the end of three quarters, but he adds seven assists to in limited minutes to keep his teammates involved and begins to exert more pressure on his opponents at the defensive end.

This is all part of the plan – he says – a plan to the 25-year-old to improve every part of his game.

“I’ve been working on everything,” he says, “In the summer workouts there was a lot of defense, lot of focus on getting stronger, quicker, and also been working on my handling and passing abilities that – as a point guard – I have to be able to do every single night. Everything that I do I think I can get better that.”

“I plan to be playing in my way and doing whatever the team needs,” he adds, “My focus is on continuing to train to make myself stronger and better.”

When the fourth quarter came along, with the Warriors trailing 80-69, the show finally began.

And a few more free throws. Game over.

While the Lakers played their backups for most of the final quarter, Coach Mark Jackson put his best team out, and let his best player punctuate the night with a 14-point takeover in the final period.

No one was surprised when most of the damage came from the three-point line. At this rate, Curry has potential to challenge Ray Allen and Reggie Miller as the greatest three-point shooter in NBA history. On one memorable night, he dropped 54 points on the Knicks at the famous Madison Square Garden. He became the only player ever to finish with at least 250 threes and 500 assists in the same season. And, over the course of 2012-13, Curry set a record in the league for most three-pointers ever made in a single-season, overtaking Ray Allen’s 269 and finishing his year with 272. “I didn’t know about the record until the end of the season, but when I found out, I tried to break it,” he said.

“I’ll try to break my own record again in the coming season.” 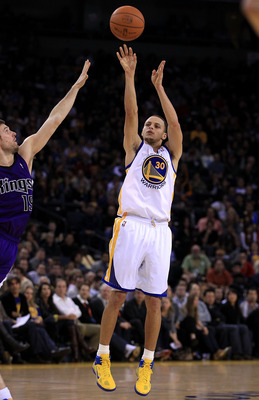 Three nights later, Curry and the Warriors steamrolled by the Lakers again, this time in Shanghai.

A torch had been passed. The Warriors are now looking past the Lakers, and are now aiming for the best teams in their conference.
“Our plan is to be as consistent as possible,” Curry says, “We can’t have any bad nights. The West is tough; every team on any given night has an opportunity to beat you. You have to show up, you have to execute, you have to be physical, and play with a sense of urgency every single night. And through the course of the season, hopefully we’ll separate ourselves as one of the best.”

With David Lee coming off an All Star season, Andrew Bogut healthy and ready to make a big defensive contribution again, Andre Iguodala added to the mix as a multi-purpose two-way threat on the perimeter, Klay Thompson still shooting lights out, and Harrison Barnes continuing his rapid development, the Warriors have the squad – on paper, at least – to improve their sixth-place finish from last season and make a deeper playoff run.

But with opponents like the Spurs, Thunder, Rockets, Clippers and the Grizzlies battling them on a regular basis, not to mention the occasional meetings with Eastern powerhouses like the Heat, Bulls, or the Pacers, Mark Jackson’s team have are still only a long-shot to make the jump from the second-round exit to genuine title contenders.

Luckily for them, they will be led by a player who is more than capable of overcoming any long-shot that comes his way. Stephen Curry gave China a show over the summer, and as the NBA season begins, he’ll make sure that the Golden State show goes on.