The BFI IMG Reliance School Basketball League continued in its second city of the 2013/14 season - Hyderabad - from the launch day on Monday, November 11 at the YMCA Secunderabad. 10 teams in the boys' section and 10 girls' teams will be competing in the competition.

The 2013-14 BFI IMG-Reliance School Basketball League returned with it's biggest iteration ever, going to a record eight Indian cities between October and December, 2013. The tournament will be held this year in New Delhi, Mumbai, Indore, Ludhiana, Hyderabad, Kolkata, Bangalore, and Chennai. The school winners from all the states will participate in the National Champions Cup to be held in April/May, 2014 in New Delhi. The Ludhiana leg of the season tipped off a few weeks ago.

Here are the teams participating in the Hyderabad league: 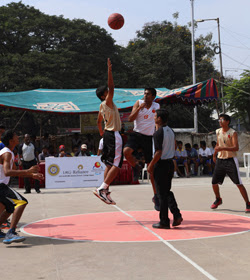