Sideline Stories: How the media experience makes the NBA much more than just basketball


This feature was first published in the 113th edition (2013 - No. 16) of SLAM China magazine. Here is the original English version of the story.

It was the glossiest credential I had ever seen. 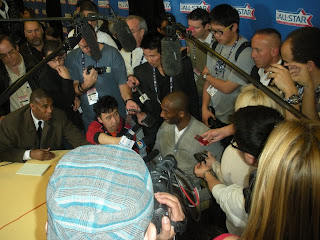 Cleanly laminated, with bright colours, a silver star, and a hologram. Even the string to band it around my neck was fancy. On the back was a list of terms and credentials longer than most legal agreement forms. A shiny NBA logo to mark its legitimacy. And most importantly, my name written in clear, large blocks right next to little headshot of my face to make it one of a kind, unique souvenir of a life-changing experience.

I had just been handed my entry credential to the 2011 NBA All Star Weekend in Los Angeles. It was a simple little piece of plastic, but capable of great power. It was my entry to all the media interaction events for the course of the weekend, from All Star interviews to practice sessions to pre and post-game locker room availability. It was the entry to the NBA’s Jam Session. And most importantly, it was a free entry to all official events at the NBA’s marquee weekend, from the Rookie Game to the Slam Dunk Competition and of course, the headliner, the All Star Game featuring only the finest basketball players in the world.

Examining that credential, I briefly forgot all the other faces around me. Faces of media and journalists from all around the world being handed the same powerful entry pass that I had. Each a similar-looking credential in size and shape and logo, font, and silver star; and yet, each one unique in the name of the media-person, their own photograph, the name of the media they represented. It was a collection of writers, editors, cameraman, and photographers from all across the planet, from China, Spain, Argentina, India, Japan, England, Kenya, the Dominican Republic, France and dozens of other countries, from every home city representing a team in the NBA and dozens more, from TV channels, magazines, newspapers, radio stations, websites, blogs, from those who wrote about sports, about fashion, about lifestyle, about the economy, and those who brought all the headlines together. Some had been here many times before and were veterans in the NBA Media universe; others – like me – were relative rookies just soaking in the experience for the first time in their life.

There were a hundred others, going through the same personal, unique experience at holding on their unique, glossy credential; a hundred of media personalities from around the world that lumped together to form a whole, to form the media circus which becomes as important a part of the NBA world as the basketball that carries the NBA forward.

Basketball is growing, quickly, globally. And you just have to find the statistics for the 2013 NBA Finals to believe it. The largest contingent of international media ever – over 300 journalists and media personalities from outside the United States – would have traversed between Miami and San Antonio closely following and reporting on the clash between the Spurs and Heat. These aren’t just the newspaper columnists or radio jockeys of yesteryears; the media is now interacting and reporting in more ways than ever before. They are capturing the Finals experience through their words, through photographs, through Television news reports, and combining the social media with all their content more than ever before. The Finals aren’t just being broadcast live on Television; they are live on Twitter and Weibo, they are being shared through Facebook and Weixin, they are being talked about on VLogs, shared via Instagram, Vine, through mobile applications, through blogs, and of course, through the trustworthy old magazine that you now hold in your hands. An NBA fan can enjoy the Finals content in any way he so chooses and at any time he wants. And there’s a host of people at work tirelessly part of the NBA’s global media circus making sure that the fan gets their update just how they like it.

It helps that these Finals feature more international players than ever before: 10 players on the two Finals’ teams come from outside the USA, with nine of them representing the Spurs. Fans from France (Tony Parker, Boris Diaw, Nando de Colo), Argentina (Manu Ginobili), Brazil (Tiago Splitter), Canada (Cory Joseph, Joel Anthony), Australia (Patty Mills, Aron Baynes) have extra reason to tune in. And of course, it is easy to forget that even the great Tim Duncan hails from the Virgin Islands. The Spurs can also count one of the most famous players of the past decade on their roster – Tracy McGrady – who may not be getting too much playing time on the court but whose name still makes heads turn across the world. 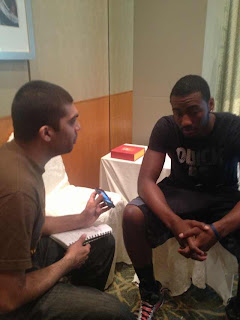 The Spurs might have a global village in their roster, but the Heat are arguably even more popular worldwide. Having LeBron James – the best player in the world and the poster-boy of the NBA – certainly helps. His co-pilot, Dwyane Wade, wears shoes manufactured by a popular Chinese company. And the popularity of other players Chris Bosh and even Ray Allen make Miami one of the most closely-followed teams in the world.

This explosion of international players and internationally popular players on the world’s biggest stage has resulted in these Finals being broadcast live in 215 countries and territories around the world and the play-by-play action being translated in 47 different languages. The entire planet is tuning in to join basketball’s end-of-season party.

The NBA’s relationship with the media is so strong that, even on a random regular season game, sometime in mid-November, between two teams that may not even be playoff threats, you can still catch the frenzy of attention that NBA stars receive from the media. 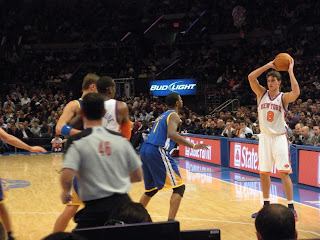 November 10, 2010, Golden State Warriors @ New York Knicks. That was the first NBA game I ever attended, and so I remember the date and the final score (122-117 to the Warriors) vividly. I remember the Madison Square Garden, the taste of real New York popcorn and pizza, stepping on court of the world’s most famous arena, and the sight of some of the world’s finest athletes competing just a few feet away from me.

These were the pre-Carmelo Anthony days in New York, even the pre-Jeremy Lin days, and despite the presence of Amar’e Stoudemire, David Lee, Stephen Curry, and Monta Ellis, there was little or no hype for this game on this random Wednesday night. Lin was there too, as an unheralded and barely-known member of the Warriors’ bench. The game wasn’t nationally televised and few outside of New York or Oakland paid attention to David Lee’s first game back to his old hunting grounds.

And yet, the show never stopped. Post-game, hordes of media-persons surrounded Stoudemire in the Knicks locker room. Italian media spoke to Gallinari and Russian journalists chased Timofey Mozgov. Even in the pre-Linsanity days, a small number of die-hard Chinese and Taiwanese fans closely followed Jeremy Lin, and the three minutes of action he saw that evening wouldn’t have gone unnoticed by the Asian media outlets. From the live broadcast on the MSG Network to world-acclaimed writers of the New York Times, even that random Wednesday night in November had a memorable life of its own. 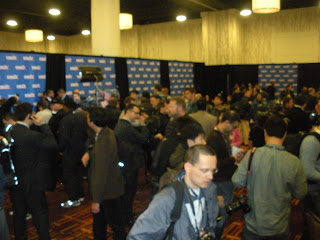 The media frenzy that follows the NBA Finals make the off-court show as intriguing as the one on it. While we keep our eyes peeled for the highlight-reel dunks or the momentum-shifting blocks in the flow of the game, we also can’t avoid the stories on the sideline – the reporters, the broadcasters, the photographers, the bloggers – the people who bring the game closer home than ever before.

I’ve still kept my 2011 All Star Weekend Credential with me to remind me of the moment when I became just one unique individual, with his own unique story, but covering a shared experience of the larger NBA universe together with hundreds of other colleagues. I haven’t yet had an opportunity to experience the NBA Finals first-hand, but through the shared voices of the hundreds who are there every year, any place in the world can resonate to sound like NBA arenas in Miami or San Antonio.