You can vote for the NBA MVP

As if letting NBA fans vote for All-Star starters wasn't controversial up enough (see Iverson, Allen or McGrady, Tracy for further proof), the NBA is now going to give one of its 125 Most Valuable Plater (MVP) votes to the fans. The other 124 votes for the MVP are decided by a panel of sportswriters and broadcasters throughout the United States. The one fan vote will be the accumulated vote of all the fans. 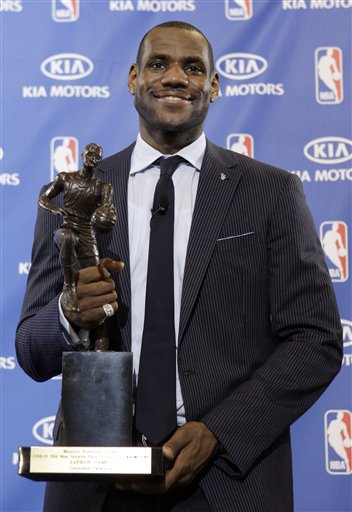 Okay, so 1/125 isn't that big a deal when it comes to shaping the MVP award, but its still significant. You can vote for your top five MVP choices at NBA.com/kiamvpfanvote.

The pros: Obviously, more fan involvement, interaction, and as 'Wikinomics' preaches, "When you ask the customers to dance, let them lead!" This would mean that fans would (faintly) believe that there opinion is making a difference in deciding who has been the season's most valuable player.

The cons: It's the friggin MVP award. Not a popularity contest. The All Star Game is the popularity contest, where the game is an exhibition FOR the fans, and thus one can argue that letting the fans decide who they want to see is the right move. The MVP award, on the other hand, is about the one player who has been the most valuable in the entire league, not to the one player who fans like the most. Obviously, there is a great number of fans who would vote sensibly, but you won't find too many hardcore Kobe fans voting LeBron despite the latter deserving the award much more. I don't want to see a billion Yao Ming votes when he is injured or not as many votes for Tim Duncan (because everyone outside of San Antonio seems to hate the Spurs) or not as many votes for Kevin Durant (because despite his brilliance this season, Kobe/LeBron/Iverson/McGrady/Yao etc are a lot more popular than him internationally).

Now, on to my top five MVP pics. I'm going to make two lists here, one based on sound reasoning and one based on passion. Because you know, if they ARE going to let us vote here, are we not going to let our opinions seep through?

1. LeBron James: Duh... Obviously. LeBron has been the best player in the league and the best player in the best team and is near the scoring leader and has the best stats and may end up having the best PER EVER and he's the most untradeable and the most valuable and you take him out the league or his team and it'll make the biggest difference and damn I hate over-LeBroning of the world. I'm not the LeBron fan that many, many others are, but there is no denying that anyway you define the meaning of MVP, he is it this season. He won it last year and only the infinite improbablity drive can keep him away from doing a back-to-back. But most probably not.

2. Kevin Durant: Damn, the Durantula really sneaked up big on everyone this season, didn't he? I mean, we all knew he was talented, but no one imagined that along with invidual brilliance (he might win the scoring title from LeBron), Durant has also made sure that the awful Thunder of last year have already won more than twice as many games this season, and the young, inexperienced team is easily heading into the playoffs. The most improved team of the year, on the back of one of the best talents in the league. Durant deserves a nod for his efforts all year.

3. Dwyane Wade: Three weeks ago, Kobe would've been number three on this list. But the month of March has been gold for D-Wade and the Heat. He has once again carried an inconsistent and awful team into the playoffs, improving his play off late and making sure that the Heat are now an 8-game winning streak entering the most important period of the year.

4. Kobe Bryant: Can't believe that after the first month of clear-cut domination Kobe has falled to FOURTH on my list. But Lakers are the second best team, he's their most valuable player, and still one of the best talents in the league. Plus, there were all those game-winners that have been leaving us all in awe. Plus, I still think that he will be the last one standing with the championship trophy in June.

5. Steve Nash: The two-time MVP is again having one of his best seasons, and the Suns, who are surprisingly underrated this season, have been playing amazingly under him. Of course, this is an arguable choice because Amar"e has been just as awesome, but i'm gonna go with Stee here.

1. Wade: Ya, he's my favourite player. And I still believe that he's the one player I'd like to have on my time for any one basketball game anywhere in the world.

2. Chris Bosh: Bosh has been having an all-world season, and although the Raptors dipped in form for a while, he has been able carry them close to a playoff berth with his amazing form.

3. Pau Gasol: Don't laugh. The Spaniard keeps on getting overlooked for his awesomeness, despite being a rock for the Lakers all season. Give Gasol enough touches and Lakers don't lose, it's as simple as that.

4. Amar'e Stoudemire: Amar'e has been a friggin beast all season, but especially after the all star break. He's ignored all the trade rumours and the contract-ending stuff and has just played amazing basketball. He has also helped the poster-making businesses around the world. Just as Anthony Tolliver.

5. Deron Williams: The Jazz are a model of consistency, and no one player has epitomized it more than Deron.

So who will finally win the MVP? Let me know your top fives, and vote here to get your voice heard. The results will be announced at the end of the season.