Continuing to work with youngsters at the grassroots level, Subhash Mahajan of the Sumpoorna grassroots basketball movement organized a pre-season tournament of the Sumpoorna Annual Basketball League (SABAL) at Vidyaranyapura in Bangalore from April 21-24. 53 children, all below the age of 15, participated in the five day summer event.

Mahajan said that "The idea of this type of tournament for the children was to promote the game with more enjoyment and compassion and less pressure on the kids." For the first four days, the children participated in casual games and training, so that all of them had a chance to participate. A knockout tournament of the eight teams was held on the 25th.

The Tumkur edition of the SABAL preseason tournament will be a bigger affair, set to take place from May 19-21 at the Tumkur village near Bangalore. Mahajan expects the participation of up to a 100 kids.
"The full SABAL league begins in July, after the schools re-open," added Mahajan. 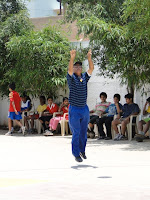 The hard work of Sumpoorna to promote basketball in Bangalore, Tumkur, and nearby villages have shown fruitful result as the game has grown astronomically amongst the youth in that region. Mahajan is continually in search of moral support and visits from Indian professional players and basketball fans to pay a visit to his camps and watch the game taught and played at the grassroots level.