Share|
India's untapped potential for a basketball revolution has long been realized around the world - a country of nearly 1.2 billion people must surely have at least a respectable starting 5 to step out on any court and face any opponent, right? Surely?
But potential is one thing, its realisation another. India is still a country where most sports, excluding cricket, aren't taken too seriously. While other Asian countries like China, Iran, South Korea, and Kazakhstan have improved their level of basketball dramatically over the last decade, India still lay 52nd on the last Men/Women combined FIBA rankings. 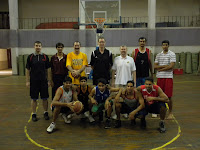 But there is the potential, and although it may be difficult to make a change overnight, there are several who are chipping away every day, hoping one day to carve out a space for basketball in this cricket crazy country. After spending several years holding training camps and coaching in India, American basketball coach JD Walsh recently teamed up with Dr. Bob Baker (Head of Sports Management at George Mason University) and Craig Esherick (former head coach of Georgetown University) to hold combined coaching clinics and youth basketball camps in South India. The initiative was sponsored by the International Sports Initiative grant, awarded through the SportsUnited Division of the US state department's Bureau of Educational and Cultural Affairs.
Walsh, Baker, and Esherick spent around 10 days in India, holding basketball clinics and camps in Chennai and more intriguingly, getting a chance to work with a few members of the Indian Men's National team in the city of Bangalore. Only seven of the 21 total members of the Indian squad, nicknamed 'The Young Cagers', showed up for the training camps, but they were accompanied by dozens of interested basketball coaches from around India who came to pick up coaching skills from the American coaches. I was lucky to speak to all three of them before they boarded their flight (and beat volcanic ash) to get back to the US last week.
"Some of the boys we worked with were pretty good," said Esherick, who helped in organisation practice drills for the players that attended, "But it will take a lot of hard work and organisation on the part of the basketball federation here to make a decent team." 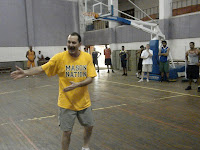 Esherick should know - currently the assistant professor of sports management at George Mason, one of the highlight's of Esherick's coaching career was playing the role of assistant coach and scout of the US Men's Basketball Team that won bronze in the 1988 Olympics in South Korea.
The trio of American coaches also worked with Alexsander Bucan, the Serbian head coach of the Indian team. "We have tried to help Alexsander demonstrate basketball fundamentals to the players," Esherick added, "This is a young team with a good nucleas, and their hard work will pay dividends later on. They need to play together, train together, and stay together to form a good squad. They must travel together and get some more exposure. But all these things won't be possible without a stable structure and the right amount of financial assistance from the federation."
The current national team is indeed a young squad, with most of their players under the age of 24. At the recently concluded South Asian Games in Bangladesh, India was captained by 18 year old Vishesh Bhriguvanshi. Vishesh is one of the brighest young Indian talents, first making his name when he won the MVP award at the Basketball Without Borders (BWB) Asia camp two years ago. He also won praise for his hard work at the camp in Bangalore.
"He's a good shooter and has a strong inside game, too," says Esherick. Walsh adds, "Vishesh has good size and he works hard - but more importantly, he really wants to be a better player." Apart from Vishesh, Walsh had warm words for a few other Indian guards too, particularly praising their shooting ability.
I take special, biased pride in Vishesh's successes - he is one of the many hoop talents rooted from my hometown in Varanasi. A city known more for its spirituality than its sports, Varanasi has surprinsingly been able to produce talent after talent for both the Indian men and women's teams. I interviewed Vishesh for the first time when he was just 17, fresh after his BWB MVP award - in two years he seems to have build on that potenial.
Potential. And it seems like that word never seems to leave my mind when I think about Indian basketball. No, potential isn't good enough. Far from it.
Bob Baker, who also spoke about his experience and welcome so far in India, agrees that the country can do a lot more in the world of hoops. "It is important for India as a big player in the global community to make a strong commitment to the sport of basketball," feels Baker, "There needs to be a strategic approach to the whole organisation of basketball here. The federation and other organisers need to work on how to keep the players together, what other things to teach them, how to get them to play more games..."
"But I'm confident that these players will develop," he adds, "That is the best way for the sport to be visible to the audiences and popular in Indian culture."
Baker was also encouraged during this camp by the enthusiasm of the attending coaches from around India. "The coaches really cared about developing their knowledge of the game," he said, "They absorbed our teaching, asked great questions, and we spent a lot of time discussing basketball teaching and strategy with the coaches. It was neccessary to talk to both the coaches and the players about the importance of fundamentals."
Walsh added: "The coaches were really interested and asked a lot of questions. We worked with them on various offensive and defensive sets - motion offense, press, etc. It is disappointing that only seven players of the team showed up, because we would have obviously liked to see the entire team. I would love to come and work with the national team on a more regular level." 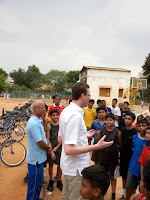 Apart from their camps in Chennai and Bangalore, Walsh, Esherick, and Baker also got a chance to see another side of basketball in India when they visited Subhash Mahajan and his Sumpoorna camp at the village of Tumkur. Mahajan has been working for several years to support India's grassroots basketball movement. After deciding to synchronise their efforts, Walsh and the others visited Mahajan during their trip where they interacted with young hoop lovers.
Many of the kids who play in the village camps are from underpriviliged backgrounds, sent from an NGO called Shishu Mandir in Bangalore. "The kids here are now gaining more awareness about basketball now that JD has been visiting and helping out," said Mahajan, "They were just awestruck just to see the tall Americans! Some of them asked the JD and the others if they could pass on LeBron James' e-mail ID!"
Mahajan admits that cultural challenges in India make it difficult for people to take sports seriously, but he was glad that the children got to know that there is more to the game than just casual shootarounds on the court. "They have to learn about a serious world of basketball, that they have to persist regularly and practice hard to make a life out of it."

The USA's assist to aiding basketball in India has continued in another form - NBA-India has recently launched the Mumbai edition of the Mahindra-NBA Challenge, which features a recreational basketball league and training camps for hoops enthusiasts in the city. Laker legend AC Green was in town along with former WNBA player Teresa Edwards to tip-off the tournament. Green has since been to Bangalore to help out in an Indian national training camp for under-18 girls. This iniative was taken in the form of a pact that the NBA has entered with the Basketball Federation of India (BFI) to provide world-class training to the Indian players and coaches.
Green said at the event: "Indian women players have lot of potential and they are no less than anyone in the field. What they need is an opportunity to prove themselves."
Potential. There seems to be hell of a lot of that going around our 1.2 billion isn't it?
There is still a long way to go to fix the untailored and casual culture towards sports in India. Federations have to be organised, players have to be provided incentives, accountability has to be asked for, media hype to be created, and most of all, the game has to be loved. But basketball, if anything, is a hell of a lovable game. There are various efforts offering the game an assist here - let's just hope that we can finish the play.