In December, the new season of NBA's grassroots teaching initiative - the Reliance Foundation Jr. NBA programme - was launched to engage over 45 lakh youth in 34 cities around India. Now, as the season of hoops reaches completion, the best of the best from around the country will gather together in Greater Noida to determine India's national champions - and qualify for a first-time opportunity to compete in the Jr. NBA World Championship!

The NBA announced that the Reliance Foundation Jr. NBA National Finals will be held at the NBA Academy India in Greater Noida from April 29 - May 2. The competition will bring together eight boys and eight girls teams composed of the top 10 players from each Reliance Foundation Jr. NBA City Tournament in Bengaluru, Chennai, Delhi, Hyderabad, Kerala, Kolkata, Mumbai and Punjab. 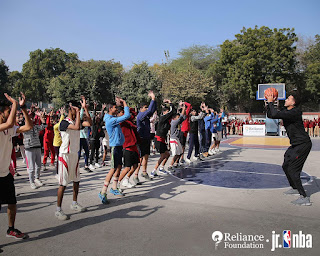 The winning boys and girls teams will advance to the Jr. NBA World Championship from Aug. 7-12, 2018 at ESPN Wide World of Sports Complex near Orlando, Florida.

The Jr. NBA World Championship, a first-of-its kind global youth basketball tournament for elite 13- and 14-year-old boys and girls teams from around the world, will have boys and girls divisions, each comprised of 16 regional teams that will receive all-expenses-paid trips to compete in the inaugural event. The championship will include round-robin competition followed by single-elimination tournaments. The teams will be chosen from winners from eight newly-created USA regional tournaments (Central, Mid-Atlantic, Midwest, Northeast, Northwest, South, Southeast and West) and international regions (Africa & Middle East, Asia Pacific, Canada, China, Europe, India, Mexico and South America). Winners of the U.S. and international brackets will play in the World Championship game on Aug. 12.

"The Jr. NBA World Championship adds another significant layer to the NBA’s existing youth basketball programming and development efforts in India," said NBA India Managing Director Yannick Colaco. "The new global youth basketball tournament will provide Reliance Foundation Jr. NBA participants with a once-in-a-lifetime opportunity to showcase their skills on a global stage and learn the core values of the game from their peers from around the world."

In addition to the on-court competition at the Jr. NBA World Championship, boys and girls from dozens of countries from around the world will participate in off-court activities – often alongside current and former NBA and WNBA players – including life skills education, physical and mental wellness programming and NBA Cares community service projects.

Fox has signed a three-year deal with the NBA to televise the Jr. NBA World Championship event.
Posted by KARAN MADHOK at 19:49