First-timers in the Asian circuit, Australia, routed hosts China in the final to win gold at the delayed FIBA U16 Asian Championship in Foshan on Sunday, April 8, 2018. The tournament, originally slated to be held last year, brought together the best youth players from Asia/Oceania from 13 national teams. 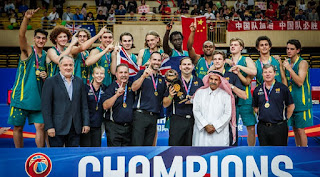 India's youth squad also took part in the tournament, but had a disappointing outing, losing all of their preliminary round games and finishing at last place.

Australia got off to a slow start in the final on Sunday, as China build up a 6-point lead after the first quarter. But then the tides change, and the Aussies' offensive arsenal took control. Led the unstoppable trio of Luke Travers (22), Wani Swaka Lo Buluk (21), and Tamuri Wigness (20) Australia beat China 91-67 to win the championship. Haoqin Sun had 16 for China in the loss.

Another newcomer - New Zealand - secured third place in the tournament by defeating the Philippines 76-70 in the bronze medal game on Sunday. The win was fuelled by a 24-7 second-quarter run by NZ. Marvin Williams-Dunn (17) and Mitchell Dance (16) were New Zealand's top performers, while Terrence John Fortea scored a game-high 18 for the Philippines in the loss. 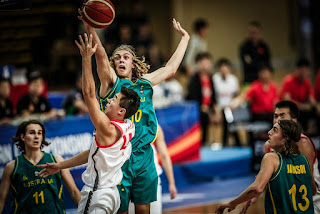 The top four finishers above qualified to represent FIBA Asia to the 2018 FIBA U17 Basketball World Cup.

India were placed in Group D of the preliminary stage of the tournament, the only group with four teams, making it mandatory for the team to win at least one game to move on to the next stage. India sent a squad of the best young players in the country, headlined by Harshwardhan Tomar, the captain, Princepal Singh, and coached by Vibhor Bhriguvanshi.

It was a difficult outing from the very start. India opened their campaign against reigning champs Korea, who immediately pulled out to a 27-12 first quarter lead. Despite matching the Koreans blow by blow for the rest of the game, the early hiccup was too much for India to overcome, and Korea went on to win 92-71. Jae Hyeon Kim scored 19 for his side in the win. India's top player was Princepal, who had 28 points and 17 rebounds in a heroic losing effort. 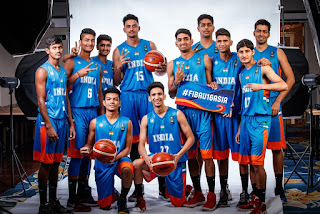 India faced another Asian powerhouse - Japan - in their second game. This time, India started better, and the score was tied at 17-all after the first quarter. But Japan took complete control from there on, taking a sudden 24-point lead in the second quarter and continuing their strong defence and tough shooting to notch a 109-57 win. Keisei Tominaga (27), Chikara Tanaka (22), and Keijiro Mitani (18) led Japan. India's top player was again Princepal, who had 26 points and 13 rebounds.

The team's final contest, against Lebanon, would prove to be the closest, to determine which team would join Korea and Japan in the next round. Once again, after a good first quarter, India slipped, and Lebanon turned a 2-point lead to a 15-point advantage by halftime. Despite a strong second-half surge, India couldn't close the gap and lost the game 88-81. Rayan Raine Zanbaka scored 27 for Lebanon while India were led by Rajveer Singh Bhati (22) and Priyanshu (16) in the loss.

The loss dropped India to 0-3 to finish at last place. 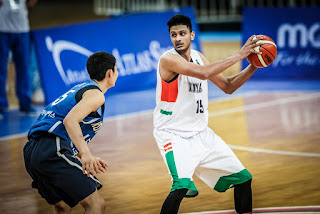 Although it was a disappointing outing overall, India can be encouraged by the performances of Princepal, who has improved a lot after spending the past year with the NBA India Academy in Greater Noida. The 6-10, 17-year-old Center led the team in scoring (22.7) and rebounds (13.0) and is sure to be a force for India's frontcourt in the future. Other top performers included Bhati, the team's second leading scorer, and the captain Harshwardhan, both of whom will surely be a part of the national U18 team in the next major FIBA tournament.