Before the first jump-ball was tipped up, all signs already pointed towards Australia to be a dominant force at the 2018 Commonwealth Games basketball tournament. Both Australian Men and Women's squads had won the gold on home soil the last time basketball featured in the CWG back in 2006. Both squads had already made a mark on the Olympic stage, the Asian basketball stage, and of course, in the regional Oceania bracket. Now, at the 2018 edition of the tournament in Gold Coast, they had the home support and the talent to secure the golds once again.

And that is exactly what happened. Over the weekend on April 14-15, Australia's Women and Men both won their respective finals at the Gold Coast Convention and Exhibition Centre in the last two days of the 2018 Commonwealth Games in impressive fashion. Both finished their outings at GC2018 undefeated. 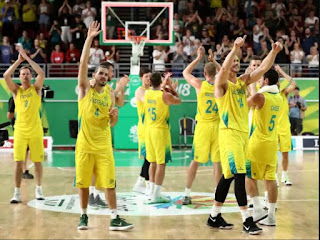 Australia's Women's squad played their final on Saturday, April 14, against England and blew past them for an easy 99-55 win, led by Kelsey Griffin (16) and Cayla George (16).

While Indian athletes at Gold Coast generally enjoyed a lot of high points and success during the Commonwealth Games, the same couldn't be said about the basketball squads. Despite giving themselves several weeks of preparation and naming the best-available healthy players in both the Men and Women's teams, India returned from Australia having lost all of their games in both divisions. 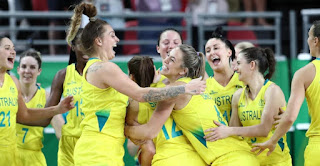 Led by Serbian coach Zoran Visic, India's women's team featured many of the heroes from the FIBA Asia Cup second-division triumph, including Jeena Scaria, Grima Merlin Varghese, Raspreet Sidhu, and Rajapriyadarshani Rajaganapathi. Missing in action was India’s most experienced player and captain, Anitha Paul Durai. But taking charge in her absence will be the hero of the Kazakhstan final herself—Shireen Limaye—who has been handed captain’s mantle and will hope to inspire the squad to more heroics at this prestigious stage.

India got off to a fraught start against Jamaica. Despite staying neck to neck with their opponents all game, India never quite had the extra level to push ahead. Jennifer George scored 19 for Jamaica in a 66-57 win, while India were led by Limaye's 18.

India's biggest disappointment would probably be the Game 2 loss to Malaysia, who are familiar rivals on the Asian stage that India has often defeated in the post. It was an up-and-down game, with India trailing only by four before the start of the final quarter. But Malaysia finished with a flurry and raced away to an 85-72 win. Fook Yee Yap scored 18 for the winning side while India were led by Scaria's 19 points and 13 rebounds.

India's final game was another loss to eventual bronze-medallists New Zealand. NZ outscored India 31-12 in the first quarter and kept a command of the game throughout, cruising to a 90-55 victory. Cocks scored 21 for the winning side. 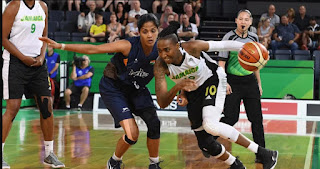 India Women ended the tournament 0-3, knocked out out of the preliminary round.

Coach Rajinder Singh was at the helm of India's Men's roster, which came headlined by internationally experienced bigs like Amjyot Singh, Satnam Singh, and Amritpal Singh. Amritpal, unfortunately, injured his ACL in the run-up to the tournament and was ruled out. India were already shaky in the backcourt in the absence of the injured Vishesh Bhrighuvanshi. The development of another big, Aravind Annadurai, provided some hope for the national squad. Experienced forward Yadwinder Singh was named the team's captain.

Led by Amjyot (23), India got off to a strong start in their first game against Cameroon, even leading by 24 points halfway into the contest. But Cameroon weren't deterred, and led by Arnold Akola Kome (21) and Robert Songolo Ngijol (17), made a memorable comeback to tie and then overturn India's lead. In the end, India stared down a massive collapse as Cameroon held on to win 96-87.

The collapse took fizzled out India's energies, and the team played uninspired in their second game, a 100-54 loss to England. Adam Thoseby had 20 points for the winning side while Annadurai showed some flashes of offensive prowess for India, ending with a game-high 22. 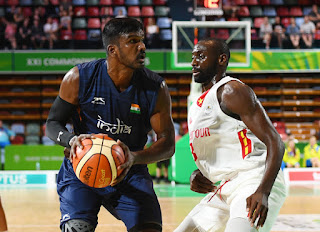 India played better against Scotland in their last game, trailing just by 8 at halftime. But a 29-11 third-quarter run by the Scots snatched the game away, and despite a late run by India, it wasn't enough to avoid the 96-81 loss. Scotland's top player was Nicholas Collins (16). India's trio of bigs came up huge in the loss, led by Annadurai (27 points, 14 rebounds), Amjyot (26 points), and Satnam (16).

Like the Women, India's Men also ended 0-3 and were knocked out of the preliminary stage.