It won't be until mid-August that Asia's biggest sports bonanza - the 2018 Asian Games - will begin in the Indonesian cities of Jakarta and Palembang. India's basketball squads - both Men and Women - are already looking ahead to participate in the Games' basketball tournament. 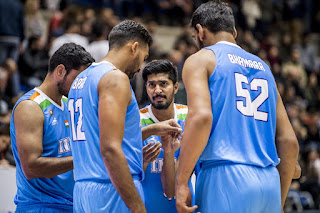 But long before the main event, India's Men's squad will have a chance to test out the site for themselves. India is one of the four teams invited to participate in the 18th Asian Games Invitational Tournament 5x5 Basketball Test Event, to be held at the Istora Sanayan Hall, Gelora Bung Karno Sports Complex in South Jakarta. The other participating teams are hosts Indonesia, Thailand and Timor Leste.

This little tournament is perfectly-timed for the Indian national squad, who have spent the past week in camp in Bengaluru preparing for the next round of FIBA World Cup qualifying games later in the month. After losing the first two qualifying games in November, India will hope to bounce back as they host Jordan and Lebanon on February 23 and 26, respectively.

India will be without their "Big Three" of Vishesh Bhriguvanshi (injured), Amjyot Singh (NBA G-League), and Amritpal Singh (NBL Australia) for this tournament, but they will feature a mixed group of experienced and youth players in Indonesia, including former NBA draftee Satnam Singh, point guard Akilan Pari, and Yadwinder Singh. The squad will be coached by Rajinder Singh.

India will play their first game against Thailand on Thursday, February 8.

The 2018 Asian Games are set to be held in Jakarta and Palembang in Indonesia from August 18 - September 2 this year. In the 2014 edition of the Games in Korea, the host squad won gold in both the Men and Women's divisions. India's Men finished the tournament at 12th place while the Women at 6th.
Posted by KARAN MADHOK at 23:16