Looking forward to hosting the Asian Games later this year, Indonesia needed a tournament to prepare for the big sporting festival. Looking forward to big FIBA Asia Qualifiers, India needed some international basketball experience. And at the 18th Asian Games Invitational Tournament 5x5 Basketball Test Event in Jakarta over the past week, both the nations got their wishes fulfilled. At the finale of this invitational four-team event, it was the hosts, eventually, who added the cherry on top, defeating India in the gold medal game on Monday. 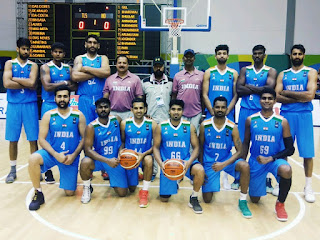 After losing to India earlier in the group stage, Indonesia put up a stronger performance in the final, outscoring India 18-10 in a crucial second-quarter run that eventually decided the result. Despite a monster game by forward Aravind Annadurai (25 points, 19 rebounds) India's attempt at a late comeback fell short. Indonesia won 78-68 to win the gold, led by Andakara Prastawa's team-high 18. India, who had finished the group stage 2-1, settled for the silver medal.

The basketball tournament at the Asian Games Test Event was held from February 8-12, 2018 at the GBK Hall Basket in Jakarta, Indonesia. Led by Coach Rajinder Singh, India sent a 12-man squad to this event, featuring the likes of the aforementioned Annadurai, Satnam Singh, and Akilan Pari. The 2018 Asian Games are set to be held in Jakarta and Palembang in Indonesia from August 18 - September 2 this year. In the 2014 edition of the Games in Korea, the host squad won gold in both the Men and Women's divisions. India's Men finished the tournament at 12th place while the Women at 6th.

India had a slow start to the tournament. In their first game Nutchapong Pattharapisan (20) led Thailand to a 79-72 win, despite a 27-point outing by Annadurai. Led by Joginder Singh (19), India got back in the win column against Indonesia in Game 2, 66-55. India's final group stage victory was a blowout over Timor-Leste 145-50. Nine Indians hit double digit scoring in this win while Timor-Liste were led by Gilberto Soares Pinto (22).

Before the Indonesia-India final, Thailand defeated Timor-Leste 139-76 on Monday to win the bronze medal. The game featured an incredible 65-point scoring outburst by Thailand's Guntapong Korsah-Dick, and 27 by Chatin Rattanawiwatpong. Abrito Guimaraes countered with 39 for Timor-Leste in the loss.

This little tournament was perfectly-timed for the Indian national squad, who have spent the past week in camp in Bengaluru preparing for the next round of FIBA World Cup qualifying games later in the month. After losing the first two qualifying games in November, India will hope to bounce back as they host Jordan and Lebanon on February 23 and 26, respectively.

It's not known yet whether any of India's top players - namely Amjyot Singh (NBA G-League), Amritpal Singh (NBL Australia), or Vishesh Bhriguvanshi (injury) will be available for the crucial qualifiers in a couple of weeks. For now, India can take heart in the experience provided by these few games, and particularly, in Annadurai's performances as the team's top offensive option.
Posted by KARAN MADHOK at 23:13