The Basketball Federation of India (BFI) announced on Thursday that Zoran Visic - the experienced Serbian basketball coach who has been at the helm of India's Women's basketball teams this year - will now be appointed to a new challenge. Visic has now been assigned Head Coach of India's Men's basketball team for the upcoming round of 2019 FIBA World Cup Qualifiers. The BFI has also released a list of 19 probables for Team India for the qualifying games against Lebanon and Syria later this month. 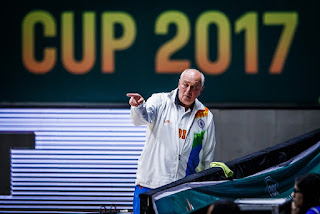 Visic's open attitude to new challenges have helped him become a surprisingly ubiquitous presence in Indian basketball over the course of the past few months. He was originally hired to be the head coach of India’s women’s senior national team in June. In July's FIBA Asia Cup in Bengaluru, he helped India win the (secondary) Division B of the competition. To maintain continuity, the BFI appointed him Head Coach of India's U16 Women's squad, too, and he repeated his feat, helping the team secure the same success (Division B win) in the same city (Bengaluru) at the FIBA Asia U16 Women's Cup last month.

Visic's counterpart for India's Senior Men's team - at the FIBA Asia Cup in Lebanon earlier this year - was experienced NBA coach Phil Weber. But Weber's appointment only lasted a few months in preparation and until the end of the Men's Asia Cup - there had been a void at the helm of the Men's team. With Visic available, the BFI turned inwards to find someone who had gained some understanding of the Indian system to lead the Men's squad forward for the next few games.

Visic is a FIBA World Instructor and has over 34 years of professional basketball coaching experience across Serbia, Romania, Russia, Yugoslavia, Lebanon, and Singapore. He was appointed coach of the Men's team earlier this month at the beginning of the Senior National Men's Coaching Camp for the FIBA World Cup Asian Qualifiers that is currently going on in Bengaluru at Sree Kanteerava Stadium. Visic's assistant coaches for the national team are Paramdeep Singh, Shambhaji Kadam and Laldingsanga Hangsing. 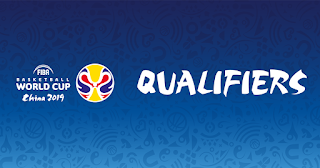 The camp, which started on November 1, will be held until November 20, before India fly to Lebanon for their first qualifying game on the 23rd, and then return home for the second qualifier against Syria on November 26.

The 2019 FIBA Basketball World Cup is scheduled to be held in China from August 31 - September 15, 2019. In the run-up to this biggest-ever event, FIBA is holding home-and-away style qualifiers over a space of 12-18 months to decide the tournament's final 32 qualifiers.

In the first round of the qualifiers, India has been grouped with Syria, Jordan, and Lebanon. Teams in each group will play each other home and away between November 2017 to July 2018 in the First Round. Listed below is India's schedule - the home team in each case is mentioned first: 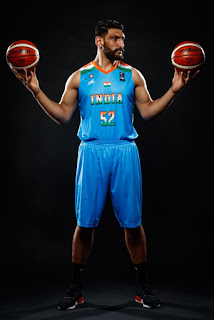 To qualify for the Second Round, India have to finish within the top three of their group. As they currently stand in the FIBA rankings, India are the third-best team in Group C, behind Jordan and Lebanon. At the FIBA Asia Cup in Lebanon in August, India lost in the group stage to Jordan, and more surprisingly, to Syria, The qualifiers will give India a chance for some redemption, beginning with the first two games later this month.

With the exception of Vishesh Bhriguvanshi, India's lead guard who has been struggling with injuries all year, the BFI has named a strongest-possible list of 19 probables for Team India at the qualifiers. This list includes Indian stars Amjyot Singh and Amritpal Singh who are currently in the NBA G-League and the NBL in Australia respectively. 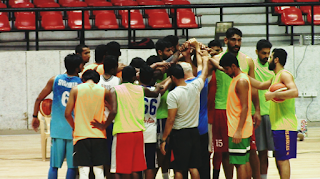 It is unlikely that Amjyot and Amritpal will return to the national team from their professional obligations to take part in the first round of these qualifiers. But the team does feature a number of other exciting players to keep an eye on. On top of the list is of course Satnam Singh, India's first NBA draft pick, who left his NBA G-League team a few months ago to focus on developing his game back home. Satnam got limited opportunities behind Amjyot and Amritpal in the FIBA Asia Cup, and these qualifiers could be his chance to prove that he could be a star for the national team. Palpreet Singh Brar, India's first NBA G-League draft pick, is among the probables, too. Experienced Punjabi bigs Yadwinder Singh and Jagdeep Singh Bains will be there to provide veteran leadership. India's issue, as before, will continue to be the imbalance between frontcourt and backcourt, as there is a shortage of star guards in Vishesh Bhriguvanshi's absence. A lot will depend on the development of rising young star Baladhaneshwar Poiyamozhi.

India will struggle without the Big Three of Bhriguvanshi, Amjyot, and Amritpal, but Visic has always focused on team success before highlighting individuals, and hopefully, he can help a new round of players carry the team forward.
Posted by KARAN MADHOK at 21:27