NBA launches new, customized India website (Yes, I'm back on board, too)


Indians are NBA fans, but we are also Indian NBA fans. And there is a subtle difference there. We love the same things that all NBA fans love: namely, our favourite teams, players, highlights, the history of the game, and exciting moments both off and on the court. But we bring whole different flavour of perspective to our NBA adoration: When we think curry, we think both Stephen and Chicken. Durant is an NBA All Star and Duronto is a category of long-distance trains in the Indian Railways. We have respect for hoops meccas like the Madison Square Garden and Staples Center but we also worship humble courts in Nagpada and the Udai Pratap College. LeBron and Westbrook are important to us, but so are Satnam and Geethu. 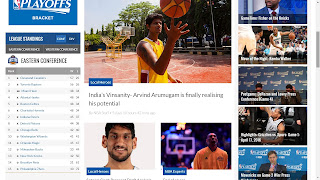 This is a unique, complicated duality, and yesterday, the NBA launched a new version of their India website to represent the duality of the Indian NBA fan in the best possible way.

The new and improved version of http://india.nba.com/ went live on Tuesday, April 26. The original website, which was launched back in December 2009, was on stall all of this season as a new, stronger system was built to bring an improved, India-centric fan experience, just in time for the NBA Playoffs to heat up. The site can be accessed by going to india.nba.com/ or simply going to nba.com from India. The website was launched in partnership with content and communications company, 120 Media Collective.

The Business Standard reported that the geo-targeted site will offer Indian fans access to video highlights, game recaps, scores, stats and more from the usual NBA.com. The responsive and mobile first digital destination will also provide extensive localized content, including podcasts hosted by local basketball personalities (that would be me) and a special section dedicated to Sim Bhullar - the first player of Indian descent to play in the NBA - and Satnam Singh - the first Indian player to be drafted into the NBA. Additionally, NBA.com in India will feature personalized settings for fans to follow their favourite NBA teams and players, an NBA FIT corner with instructional basketball content, and "Supreme Courts" showcasing the best basketball courts across the country. 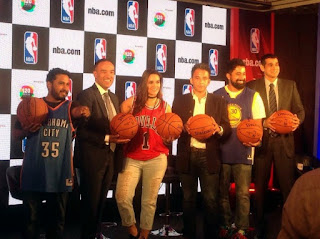 For the sixth season, I have donned my so-called 'expert' hat with features and content for NBA India again, and you can find my work - along with the work of my co-expert since 2010 Akshay Manwani - in the 'NBA Experts' section of the website. The website also features work by my colleagues on Ekalavyas.com, including a continuation of their 'Supreme Courts' series and features on Indian basketball stars in the 'Local Heroes' section.

"The popularity of basketball in India has never been stronger, and our newly redesigned digital destination will provide Indian fans with instant access to NBA news and content," said Tatum. "We are committed to the growth of basketball in India, and we will continue working with our partners to introduce new ways for fans to experience the NBA." Tatum also added that the NBA Mumbai office will now directly report to the NBA head office in New York instead of going through the Asia office. 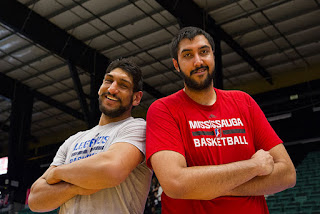 "The 120 Media Collective's expertise in innovative content creation makes them an ideal partner to produce locally relevant content to engage our fans," said Colaco. "Our new partnership will help us grow our expansive digital presence in India by providing our digitally savvy fans with a way to connect with their favourite teams and players." According to Business Standard, Colaco added that the digital destination will help bring more NBA properties to India audiences. For example, it will drive the presence of WNBA and D-League (both parts of the NBA games every season) in India. Currently, Sony Six broadcasts only the NBA games (14 games a week) which feature the men’s teams and matches and not the women’s NBA matches.

"We are excited to be partnering with one of the world's leading sports properties to engage deeply with Indian audiences," said Saluja. "NBA.com lies at the core of The 120 Media Collective's engagement strategy and will be supported by robust distribution to ensure our content is seen and shared where the audience already is."

Merchandise sales of the NBA in India increased by 200 percent this year while TV viewership (on Sony SIX) touched 70 million.

These are exciting times to be an NBA fan in India. With its new upgrade, india.nba.com doesn't just provide a beautiful, sleek new portal for the NBA's Indian fanbase; it successfully attempts to address the complicated duality of loving the league with an Indian flavour. Hopefully, you will check it often to catch up with the content that me and my colleagues will work on this season and into the future.
Posted by KARAN MADHOK at 21:43