Capitals of the country and 'Capitals' by name. And after their performance at the Gachibowli Stadium in Hyderabad on Sunday night, the Delhi Capitals have capitalized the one word that matters the most. 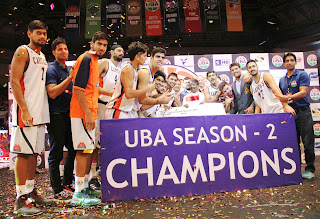 Season 2 of the UBA Basketball League - held between eight teams from all around the country from February 18 to April 3 in Pune and Hyderabad - came to a conclusion on Sunday as the squad from Delhi destroyed last year's champions Chennai Slam in Game 3 of the UBA Finals, 92-65. Delhi's performance secured them a 2-1 victory in the best-of-three championship series to make them the new title holders of India's unique new basketball league.

In the deciding Game 3, Delhi's Ajay Pratap Singh scored 21 points while league MVP Vinay Kaushik added 19 to lead their squad. After a close start to the game, Delhi were able to stretch the game to a 45-31 lead at halftime, and their continued dominance after the halftime break ensured a blowout victory. Cammy Carmel (22) and Gopal Ram (18) led Chennai in a losing effort. 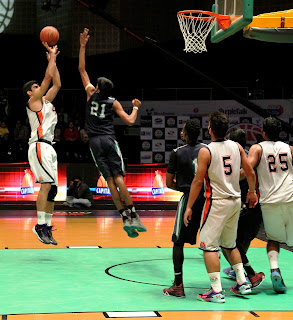 Delhi were able to bounce back in the Finals series even after going down to the more experienced Chennai squad in the first game of the Finals. In Game 1, Gopal Ram (22), Chukwunana Agu (17 points, 10 rebounds, 6 assists) and Cammy Carmel (17) proved to be too much for Delhi, using a 25-9 second quarter run to win 77-62. Delhi tied the series in Game 2 behind massive efforts by Arjun GK (17 points, 16 rebounds) and Vinay Kaushik (17) to win 77-67. Arjun GK (21) and Agu (17) were once again Chennai's best players in Game 2. Delhi carried their positive momentum en route to their clinching Game 3 blowout win.

Delhi and Chennai had defeated Mumbai and Pune respectively in the semi-final stage earlier this week to progress to the Finals.

UBA’s Director of Broadcasting Paul Crane also used the occasion to announce that Season 3 of the league will be held from 8 July to 5 August 2016 in Pune.
Posted by KARAN MADHOK at 05:20