They might've represented India's capital city at the UBA Basketball League, but the Delhi Capitals had to earn the name given to them the hard way. In season two of leauge - held in Pune and Hyderabad - the Delhi squad did just that, finishing with the league's best record (6-1) and reaching the tournament's finals. Although the team features a handful of veteran and young stars, the centerpiece around whom their success has orbited all season was India international guard Vinay Kaushik. Kaushik led the Capitals in scoring (18.7 ppg, 5th highest in the league) and contributed in all aspects of the game for Delhi.

Kaushik’s play throughout the season and in the playoffs has earned him the UBA’s Most Valuable Player Award for season 2.

“It’s really great. I have no words to say," Kaushik said at his acceptance speech at the Taj Deccan in Hyderabad on Friday, April 1. "Thank you to UBA for making it possible for me. I would like to thank my parents for making me reach here."

"My favourite moment came from the playoffs against Mumbai. The second match of the playoffs was the best. My team trusts me a lot and give me a lot of confidence."

As this Season’s MVP, Kaushik was presented with the keys of a Hyosung GT 250R Sports Bike provided by Sheng Li Tel. The bike and MVP trophy will be handed over after the Championship finale. 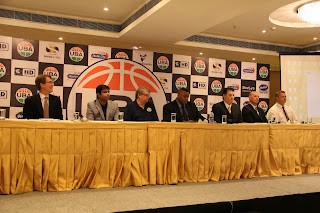 “I would like to thank the UBA- all the people that made it happen, from the coaches, to the management and production teams," said Courtney, "I give thanks to the game of basketball for allowing us the opportunity to be here today. Basketball crosses all lines- male, female, colours, generations. I would like to thank the dedication of the players and their passion and love, to be able to share their gift with us. [Now with the UBA] We are fortunate to have a good foundation and structure for basketball in India."

"We are so happy to bring Season 2 of the UBA to you," said Yanke, "One of the accomplishments of Season 2 is that we brought live basketball for the first time in India. Where are going, the sky is truly the limit. We want to continue to improve, not just the players, but all of us behind the scenes. We want this League to be the absolute best." 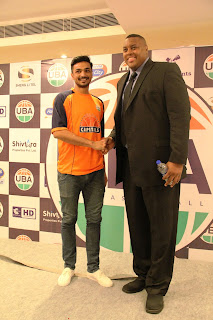