More news for NBA and basketball fans in India... I guess the NBA wasn't satisfied with just sending Deke here: Late last night, the NBA launched NBA.com/India, a website catered towards the Indian audience. According to an article released on The Times of India website last night, the website "... will offer a comprehensive fan experience including live games, video highlights, select Hindi content, player blogs and original columns from two India-based NBA journalists". 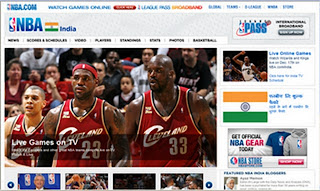 So, what does this mean? Initially, a bit of hoopla, some excitement, etc. But all that real NBA fans are really interested in are more live games broadcasted here. Two a week doesn't even start to whet our appetites...
I like to compare the "coming of the NBA" to the outrageously over-the-top coming of the English Premier League (EPL - football to the uninitiated, soccer to the American) to India: not only do ESPN/STAR Sports show five or six EPL games a week, they also have several talk shows, magazine shows, and highlight shows talking about the EPL matches in great depth. These shows are regularly directed at the Asian/Indian audience which make them even more fun to watch for the football fan here. The EPL was always on its way here - teams are Manchester United, Liverpool, Arsenal, and Chelsea easily have large audiences in India, and players like the (now departed) Christiano Ronaldo, Steven Gerrard, Wayne Rooney, Frank Lampard, Cesc Fabregas, etc, etc, etc, give our audiences icons to look up to.
But its not like the NBA has a lack of potential icons - as a matter of fact, it is literally TEEMING with it. You could play like LeBron or Kobe, like Wade or Dwight, or Chris Paul or Kevin Garnett or Duncan if you're old school. There are flashy dunks, no-look passes, game winners, and if you're yet older school, there's Iverson or Shaq (I cringe and feel pre-historic as I say that: Shaq and AI are OLD SCHOOL?)
NBA.com/India opens with a welcome message from our friendly neighbourhood NBA commissioner David Stern telling India fans how awesome the website is/how awesome us Indian fans are. Great. We are told about all the coolness the website will pack, but what really interests me are the Live Online Game Webcasts every Thursday, starting with Wizards @ Kings day after tommorow. At this point, I mentally shouted out a little "Hibachi" to myself.
Here is Mr. Stern's welcoming welcome:

Another feature will be the Point-Counterpoint Blog, kept by two of my favourite NBA PG's, Steve 'Stee' Nash and Baron 'I'll forever make Andrei Kirilenko's descendents shiver' Davis. I know, information overload, isn't it?
The Basketball Federation of India (BFI) had this to say (source: Techwhack): “There is a great appetite for basketball across India and the sites will offer Indian fans the opportunity to learn more about the NBA and basketball in India. Basketball is one of the fastest-growing sports in India.”
That it is, and in typical NBA.com style, we can expect a lot of fluffy, everything-about-the-NBA-is-awesome reporting from the India site, but hey, it's a start. The NBA has appointed two featured India bloggers: Experienced DNA sports journalist Ayam Memon and Hindustan Times correspondent Sahil Sharma. Here's to hoping that their efforts help the game blossom here.
Additionally, the NBA has also launched a mobile site for India: m.nba.com/india which will also have news, scores, standings, etc...

What do you feel about the NBA India? Share your thoughts here...