After winning a memorable double at last year's Sub Junior Nationals, Chhattisgarh's Boys and Girls had a chance to make it a 'double-double' when both teams qualified for the Finals at the tournament in Nashik (Maharashtra) this year. But their opponents had other plans: In two exciting final games at Nashik's Meenathai Thakrey Stadium on Friday, November 28, Madhya Pradesh (Boys) and Kerala (Girls) teams denied a repeat result at India's 41st Sub-Jr National Basketball Championship for Boys and Girls by bringing back the gold their respective states. The two final games marked an end to the week-long tournament featuring 45 of the best under-14 boys and girls teams from across the country. 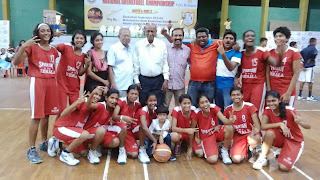 The tournament was organized by the Basketball Federation and India (BFI) and IMG Reliance along with the Maharashtra State Basketball Association (MSBA).

The boys final was a rematch between Madhya Pradesh and Chhattisgarh from last year. The two neighbouring states - one born out of the other over a decade ago - played in a tough, defensive final a year ago where Chhattisgarh emerged as winners. This was MP's third consecutive boys' final appearance, and finally, they ended their losing streak at the last stand of this competition with a high-scoring finish. After trailing by 13 in the first quarter, MP responded with a bang in the second and trailed by just three at halftime. Behind scintillating performances by Amit Singh Chouhan (31) and Manish Prasad (19), MP continued at their fast pace to stretch their lead out to a 94-82 win. Salim Ali (26) and Saif Ali Khan (24) were the leading scorers for Chhattisgarh.

The women's final was a meeting of familiar foes - Kerala and Chhattisgarh - two teams that marked the most successful junior girls basketball programmes in the country. Chhattisgarh had won every single girls' Sub-Junior title since 2002, an astonishing twelve titles in a row. But their dominant streak finally came to an end on Friday evening. Led by 36 points and nine rebounds by inspirational captain Sreekala R, Kerala overturned a two-point halftime deficit to charge ahead in the third quarter and hold off Chhattisgarh's comeback attempts in the final period to win 78-72. Despite their success at the youth and junior levels, this was actually Kerala's first Sub-Junior nationals victory in the tournament's 41-year history. For Chhattisgarh, Elizabeth Ekka scored a game-high 37 points while Neha Karva added 17. 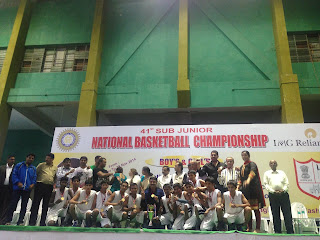 The Most Valuable Player (MVP) awards at the championship were handed to Kerala's Sreekala R (Girls) and MP's Mani Thakur (MP).

Earlier on in the day, the girls' bronze-medal game became an epic one-on-one encounter featuring two of the most impressive scoring performances ever seen at the national Sub-Junior level in India. Haryana's Meenu and Uttar Pradesh's Vaishnavi Yadav turned the game into their personal playground. Meenu scored a mammoth 65 points - a tournament high - breaking her own record of a 50-point game in the semi-final loss just a day earlier. In response, Yadav had 57 for UP to keep her side in the game. In a close back-and-forth contest, UP bounced back in the fourth quarter after trailing by five to win the game 98-95. In the boys' bronze game, Kuldeep S scored 21 to help Rajasthan defeat Odisha 73-61. Suresh D had 29 for Odisha in a losing effort.

On Thursday, Haryana's Meenu had taken part in a prior one-on-one duel, this time against the tournament's eventual MVP and champion Sreekala R of Kerala. The first girls' semi-final was held between Kerala and Haryana, which the former won quiet comfortably 96-78 after leading by just one at halftime. Once again, the story of the game however was an individual duel. Sreekala scored 42 to help her team win the match while Meenu poured in 50 in a losing effort. For Kerala, Aparna also added 28 in the win. In the other semi-final, Chhattisgarh defeated UP 73-65 thanks to 22 points by Elizabeth Ekka. Vaishnavi Yadav (34) and Shivangi G (16) were UP's leading scorers. 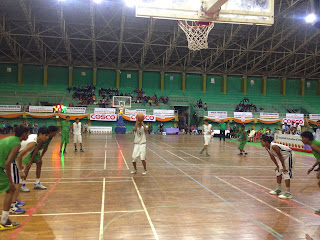 Eventual boys' winners MP fended off their semi-final challengers Odisha were relative ease, 78-61 behind 22 points by D. Raj and 16 by Harshwardhan. Odisha's best performers were Suresh Das (20) and Suresh (18). Chhattisgarh's duo of Salim Ali (18) and Saif Ali Khan (17) were at their best against Rajasthan in a high-scoring win, 96-85. While Chhattisgarh had a small edge to the game throughout, the single-handed efforts of Kuldeep Singh (36) kept Rajasthan contending till the very end. 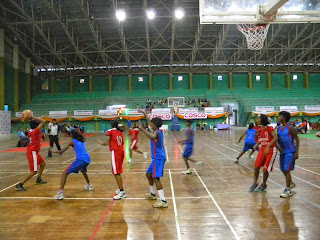