(Get on your feet, from Mumbai to Sacramento).

And with that energizing message, the Sacramento Kings launched their ode to the Indian community in the USA and back in India - their third annual Bollywood Night - during their game against the Los Angeles Lakers on Thursday, January 7 2016 at the Sleep Train Arena. Led by Vivek Ranadive, the first Indian-born majority-owner of an NBA team, the Kings made this year's Bollywood Night bigger than ever before. As a special bonus, they won a thrilling game, too, holding off former rival Kobe Bryant in his last professional game in Sacramento.

Ranadive, tech billionaire, bought the franchise in the summer of 2013 and has since taken several efforts to further the relationship between the Kings and India, between Sacramento and his birthplace Mumbai. This year was the third consecutive season that the Kings hosted a Bollywood themed night, after its previous two editions in front of sell-out crowds. The night included India-inspired fabrics and decor, cuisine, Bollywood-themed fan giveaways for those in attendance, and performances from leading Indian-American entertainers and celebrities.

Tapping into the global appeal of Bollywood on the décor and merchandising front, the night witnessed colourful fabric sheets hung from the catwalks over the bowl, rally towels on seats for all fans, Indian cuisine, Bollywood scarves and t-shirts in the team store, mehendi for fans, and warm-up shirts for the Kings’ players.

The first Miss America of Indian-descent – Nina Davuluri – joined the Sacramento Kings Dancers for a special Bollywood-themed dance routine. Davuluri was interviewed by Kings.com about Bollywood Night before tip-off. The Kings Dancers also dressed up in Indian garb on the night, as was Slamson the Lion, the Kings' official mascot. The starting line-ups for the Kings and the Lakers were introduced by a special guest announcer in Hindi. The Kings also showed a special introduction video before tip off - from Mumbai to Sacramento. 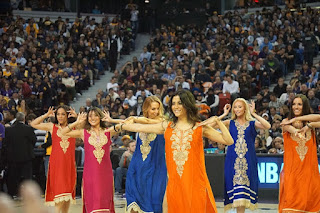 The game itself was a perfect Bollywood movie plot for the hometown team. The first half was lighthearted and jovial, with the home-team taking a 27 point lead behind an incredible performance by their hero DeMarcus Cousins (29 points, 10 rebounds, 7 assists) overcoming a strong performance by their arch-nemesis Kobe Bryant (28 points). But no Bollywood film is complete without conflict, and the Lakers made a heroically cinematic comeback in the fourth quarter to take the lead behind strong performances by guards D'Angelo Russell (27) and Jordan Clarkson. Eventually, the Kings were able to withstand the blow and give the home fans a happy ending with a 118-115 win.

After years of memorable playoff battles between the Lakers and the Kings in the early 2000s, this was Bryant's final game in Sacramento. The home crowd got a victory, but as the credits rolled in the end of the Bollywood bonanza, Bryant got a loud ovation from their rival fans. Bollywood Night was over, the respected villain lost, and the heroes notched up another win to get closer to an unlikely playoff spot!