Let's call 2016 the year of redemption in Indian Basketball, when the past greats returned to the top of the mountain and rejoiced in glory once again. For the past eight days, Mysuru (Karnataka) became the heartbeat of hoops in India, hosting the country's largest and most-prestigious basketball event, the 66th Senior National Basketball Championship for Men and Women. Over 53 combined teams in the Men and Women divisions participated, and after two high-flying finals on Saturday, January 16th, Indian Railways (Women) and Services (Men) emerged as national champions. 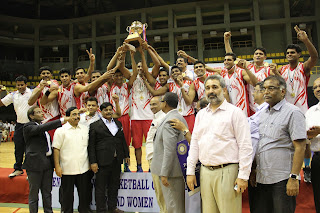 The 'Senior Nationals'- organized by Karnataka State Basketball Association (KSBBA) under the aegis of the Basketball Federation of India (BFI) - tipped off at the Chamundi Vihar Stadium Complex in the city on Saturday.The championship returned to Mysuru after a gap of 29 years. 29 men’s teams and 24 women’s teams representing most of India's states and provinces took part.

The first final on Saturday was the women’s game between Kerala and Indian Railways. Both teams entered the final with a perfect 6-0 record and were facing each other for the first time in the tournament. Kerala began the game well and ended the first period with a 3-point lead in the game. Railways made a crucial change in their defensive strategy to begin the second quarter to make a comeback. Veteran Railways point guard Anitha Paul-Durai connected on three 3-pointers on her way to 16 points. Railways blew the game wide open in the second half to cruise to a 72-55 victory, clinching the gold medal after a gap of two years. Stephy Nixon was the leading scorer for Kerala with 17 in a losing cause.

The men’s final between Services and Uttarakhand was expected to be a hard-fought battle for first place. Both teams came into the final on a 5-1 record, after knocking out the more favoured Punjab and Tamil Nadu teams in the semifinals. The defending champions started off well, with their star player and India captain Vishesh Bhrighuvanshi (20 points) leading the charge. Down by 2 points at the end of the first quarter, Services cranked up the heat with their point guard Joginder Singh shooting lights out from long distance. Joginder (26 points) nailed 6 threes in the game to give Services a double-digit lead over Uttarakhand. The backcourt due of Joginder and Narender Grewal (20 points) ensured that Services maintained a 10-plus point lead through the third quarter. But entering the fourth, Uttarakhand made a push for a comeback behind center Murali Krishna (24 points) to cut down the Services lead down the stretch. Services maintained their composure down the stretch to stave off the Uttarakhand comeback attempt. They held on to a 6-point lead to end the game with a 73-67 victory and capture the gold medal after a gap of 9 years. 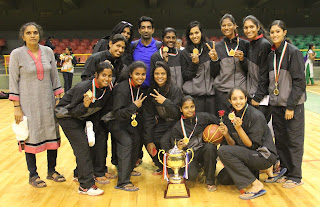 Earlier in the day, Delhi women edged past Telangana 71-66 to capture third place. Raspreet Sidhu led the scoring for the Delhi side with 21 points, while sisters Pratima Singh and Prashanti Singh contributed with 19 and 16 points respectively. Telangana centre Anusha Anto had 24 points in the loss and Jincy Joseph added 17. Tamil Nadu men bounced back from their disappointing semifinal loss against Uttarakhand yesterday to defeat Punjab and secure third place. Tamil Nadu dominated the game in the second half and ran away to an 82-68 victory. Tamil Nadu forward Aravind Annadurai scored a game-high 33 points in the contest and teammate Rikin Pethani chipped in 18. Gagandeep Singh (18) and TJ Sahi (17) were Punjab's leading scorers.

On Friday, the tournament's semi-finals were capped by a memorable comeback by Uttarakhand Men, who bounced back from 20 points down to defeat Tamil Nadu and book their spot in the Finals. India internationals Bhriguvanshi (21) and Yadwinder Singh (21) played a big part in Uttarakhand's comeback bid, as the Dehradun-based unit outscored TN 24-12 in the final quarter to win 71-69. In the second Men's semi-final, Services ended Punjab's roaring charge in style, doing most of their damage in the opening and final quarters. The trio of Jairam Jat (20), Ashutosh Rai (18), and Joginder Singh (16) proved to be too much for Punjab too handle. Services won 83-66. Punjab were led by young star Gurvinder Singh Gill (16).

The women's semi-finals on Friday turned out to be relatively one-sided affairs. Indian Railways used their experience and guile to make short work of the surprise team of the tournament - Telangana - for a 78-50 win. Experienced India star Anitha Paul Durai led Railways with 20, while Divya P. had 21 for Telangana in the loss. Kerala relied on some heroic performances by their star players to turn a potentially tricky game against Delhi into an easy win. India's rising star Jeena PS had 30 points and 10 rebounds while Stephy Nixon pitched in with 19 points and 19 rebounds to help Kerala win 82-41. Pratima Singh scored 21 for Delhi's Women. 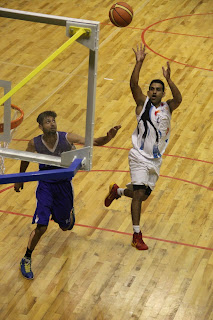