When the Basketball Federation of India (BFI) brought world-class American coaches Kenny Natt, Pete Gaudet, and Zak Penwell to work with the Indian National teams, they also brought coaches who weren’t going to be satisfied by working with India’s national team stars: to truly help the growth of basketball in India and develop the game at the grassroots level, the American coaches took part in a special clinic held at the Thyagraj Stadium in New Delhi during the Junior National Basketball Championship on Saturday where they shared their knowledge with hundreds of gathered domestic coaches, team managers, technical officials, and the players. Clinics like these can help spread the expert basketball knowledge amongst more coaches and players in the country. 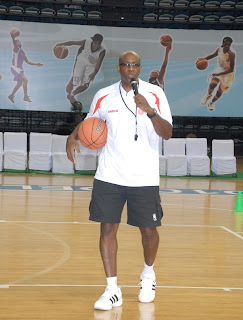 Kenny Natt, who has had nearly two decades of experience as a coach in the NBA, and is now the head coach of the Indian Sr. Men’s team, showcased several drills for the interested coaches from all over India. Natt has been an assistant coach in great teams featuring the likes of Karl Malone, John Stockton, and LeBron James – the drills that he demonstrated on Saturday are amongst the many that he has been using with players on the Indian National squad, and Natt added that these were the same drills being used by the best players in the world in the NBA.

Natt taught the coaches the ‘Star’ Lay-up and Jump-shot drill, in which the players had to run and touch different points around the court in a star-shape as they also attempted to hit lay-ups or jump-shots in between. For big men, he showed the Tap Drill and the Wrap Drill, useful in helping big men tap-in offensive boards instead of bringing them down. He also showed some defensive drills, such as the V-drill, which helps in zigzag running for 1-on-1 defense.

Pete Gaudet, who is the head coach of the Indian Sr. Women’s team, wanted to focus his session on ways to motivate young basketball players to work harder. “I know that these players will improve even after the 10 minutes of the practice drill, and I know that because I know basketball players,” Gaudet said. He is right indeed: Gaudet has been involved deeply in basketball for over 40 years, spending the majority of this time with some of the finest college basketball teams in the USA, including Duke, Vanderbilt, and Ohio State University. 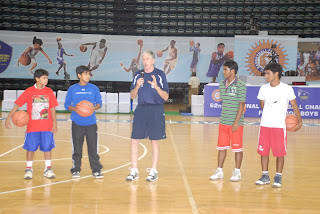 With the help of Indian National players Kokila, Akanksha Singh, and Raspreet Sidhu, and with volunteers, Gaudet demonstrated drills primary for guards, and designed to help the players gauge their own skill-level. Gaudet held a drill called ‘Makes in a Minute’, where he challenged the players to take and make as many 15-foot jump-shots as possible under one minute. By setting a standard for running and working to improve their shots taken and accuracy of each shot, he was able to motivate the players to get better each time they did this drill. The second drill he worked on was a two-dribble lay-up drill, challenging the volunteers to take off from as far as they possibly could from the basket, take two dribbles and make a lay-up. As the player’s moved further from their starting point, Gaudet was able to show the importance of helping them gain a measuring stick and look to improve on it.

Zak Penwell, who is Indian basketball’s first ever Strength & Conditioning Coach, spent time speaking on the importance of making basketball players agile, run faster, and be able to quickly change direction as they play. For this, Penwell focused on the ‘Squad Exercise’, which he calls the ‘king’ of the exercises. To increase strength, help athletes increase their jumpability, speed, and to help reduce injuries, Penwell demonstrated some exercise techniques using squats to the coaches.

At the end of each session, the American coaches opened up the floor for a Q&A from the several interested Indian basketball guides.

While it’s true that the talented and experience American coaches can’t reach every single basketball player in India, but through a good feeder system, their teachings can spread: the Indian coaches will be hoping to impart the drills, techniques, and motivational tactics learnt here to more coaches and more players across the country, and ultimately work in breeding better basketball players in India.
Posted by KARAN MADHOK at 20:00