The Big Time - Apply for the basketball reality show

Here's an amazing opportunity for aspiring basketball players with top-level ability, but who were unable to pursue their hoop dreams. Radical Media, a TV production company in Los Angeles and Budweiser are teaming up with award-winning producer Evan Weinstein (“The Amazing Race”) to create an exciting new reality show offering some lucky basketball players the chance to take the court to play alongside legends of the game. 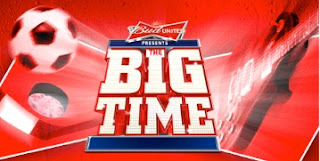 Called 'The Big Time', the producers of the show are looking for players who have the ability to compete at the highest level but who, for one reason or another, were never able to pursue their dreams of a professional career. They will be choosing a handful of players, provide them with pro coaching and mentorship, and film them as they test their skills in a series of exciting challenges.

One lucky winner will get to experience the thrill of playing with some of the
sport’s most well-known players and, perhaps, receiving a contract.

All qualified applicants must be over the age of 21 as of June 30, 2011. Applicants should submit a photo, brief bio and a phone number where you can be reached to radicalbasketballshow@gmail.com. Our casting staff will contact them for further information. Radical Basketball are accepting applications from both men and women.

The good news for some of you guys is that the one of the show's producers informed me that they will be looking out for adding players from India to this competition. The deadline for the applications is Friday, July 8, 2011 - so apply soon!
Posted by KARAN MADHOK at 14:32