Shawn Bradley volunteers at a leprosy colony in South India

Shawn Bradley is a very tall man - 7 foot 6 - who played in the NBA for a dozen years between 1993-2005, mostly with the Dallas Mavericks, and averaged a modest 8.1 points and 6.3 rebounds for the course of his career. But really, what Bradley's legacy in the league will truly be remembered for will be as the man responsible for many, many posters. Below every great dunk there was a giant, white man, just happy to add to the spectacular freeze-frame.

But from henceforth, I will think of something before 'dunked on' when I think of Shawn Bradley. Bradley, along with his wife and four kids from Salt Lake City in Utah, travelled to India on a volunteer programme on behalf of Rising Star Outreach. The Bradleys went to work with a leprosy colony in the Thottanaval village in Tamil Nadu. He spend a lot of time with people of all ages infected with leprosy.

If you don't know: Leprosy is an infectious disease that mainly affects the skin and nerves in the hands and feet, and in some cases, the lining of the nose. The World Health Organization says there are countries in the world where cases of leprosy remain high, including, Angola, Brazil, Democratic Republic of Congo and India. Since the 1980s, 11 million people have been cured of leprosy in India.

In an article for Deseret News, Kathy Aiken writes about Bradley and his experience in India.

So along with their four daughters, ages 11, 12, 14 and 15, the Bradleys traveled to the southeast coast of India to help at a school built by Rising Star Outreach.
Peery School for Rising Stars is for children of those with leprosy, children who are often shunned by their local schools and forced to beg on the streets. Everything is located on the 14-acre Rising Star campus in Thottanaval Village, which is about two hours outside of the city of Chennai.
“Going over there and working with them was an amazing experience,” Shawn said.

The family was in India for two weeks; one week with the colonies and one week they toured the country. Annette Bradley said the living conditions at the colonies were not what they were used to. The minute they left the colonies they started staying in nice hotels, but all that the family wanted to do was go back to the colonies and be with the children. They wanted to help them learn English and help them with schoolwork.
“It was really a rewarding experience,” she said.
The realistic goal for the organization is to eradicate leprosy. “Once they’ve done that, they can work on the people who have it and the scars from it and getting them back into mainstream society and becoming successful business people and contributing in a way other than sitting on the streets begging,” Shawn explained.
Leprosy can be cured with antibiotics. “They won’t have leprosy anymore, but the scars from leprosy will last with you, and if you catch it early enough, you won’t have any scars,” explained Shawn. But many people won’t get treatment because they are shunned.
Educating children and treating those with leprosy are only two of the three initiatives the organization has. The third goal is to help them create their own businesses using microlending so those afflicted with leprosy can become self-sufficient. 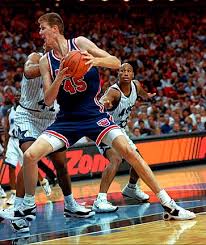 Truly, a wonderful story. Leprosy is a serious problem in India, but what is more depressing than the disease itself is the social isolation and misunderstanding that the infected have to suffer with. It's great to hear about anyone who goes out of their way to help people in need, but when a former NBA player like Bradley involves himself and talks about it, it only raises more awareness overseas about the issues facing the lepers.